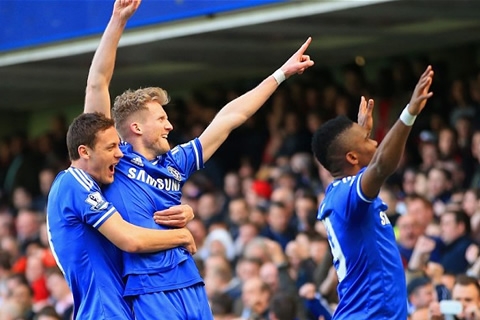 In a game to commemorate Arsene Wenger 1000th game at Arsenal, the men in red were reduced to rags by their biggest foes-Chelsea whose coach has a bitter score to settle with Wenger.

The French manager touted the clash with Chelsea as the "game of the season" but it may well be the humiliation of the season as Chelsea danced past the Gunners with six unanswered goals.

It was more a Saturday afternoon stroll at the Bridge for the Blues whose coach Jose Mourinho has had running verbal battles with Wenger the entire season.

But when push came to shove, it was the Portuguese who once again underlined his superiority over Wenger.

The men in red went a man down in the first half and six goals down after Gibbs was wrongly shown the red card for an offence committed by Chamberlain but Arsenal would have little complaints-they were shoddy in attack and lousy in defence.

32 year old Samuel Eto'o opened the scoring in the 5th minute with a goal of breathtaking genius after rounding up a number of defenders and planting the ball beyond the reach of the Arsenal goal keeper.

Andre Schurrle increased the tally two minutes later with a strike just at the edge of the box which meandered its way through the forest of legs of Arsenal defenders before entering the net.

Arsenal did not know what hit them-and like the demeanour of their coach who sat with his hands folded and shook his head for most part of game, the Gunners gave up any hope of a comeback.

It was the Blues who were bouyed and came with the third goal, albeit under dramatic circumstances. Eden Hazard won a penalty when his goal bound shot beat Szczesny in post for Arsenal but was parried away by the outstreched hand of a diving Chamberlain.

While Arsenal will not question the legitimacy of penalty, they may perhaps be questioning the red card handed Gibbs who was wrongly sent off for 'Suarezing' the ball. [Suarez parried a goal-bound header with his hand and denied Ghana a historic semi-final appearance at the 2010 World Cup.]

It was Chamberlain's crime and ought to have been punished accordingly but Hazard caredless who the culprit was. He perfectly converted the penalty for Chelsea's third goal.

Chelsea continued with the onslaught and it was the time for Oscar to take an easy bite of the Gunner cherry- and he did it with a simple tap from close range.

If there was any talking to the Gunners players at half, it did not reflect as they returned to the pitch in the second half just as absent minded as they were in the first.

The Blues continued from where they left off with Oscar getting his second of the day with a goal Szczesny could surely have done better with even if the ball took an awkward bounce. It just summed Arsenal's day of humiliation.

Egyptian Mohammed Sallah put the icing on the cake when he breached the offside trap and slotted a low ball under the armpit of an advancing Szczesny.

A humiliating outing it was for the Gunners who may just have thrown in the towel for a fight for the premiership title.