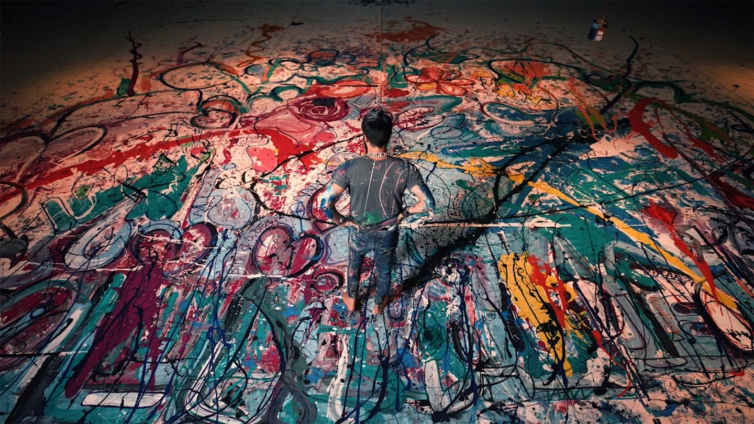 A British artist has taken over the ballroom of a luxury hotel in Dubai to produce the largest painting ever created on canvas.

Upon its completion next month, the 1,980-square-meter (over 21,000 square feet) artwork will be cut into separate panels, which painter Sacha Jafri is auctioning off in the hope of raising $30 million for charity.

Titled “The Journey of Humanity,” the work is roughly equivalent in size to four NBA-regulation basketball courts.

It is being painted at Atlantis The Palm hotel in Dubai, where Jafri has been based for over five months during which time the United Arab Emirates introduced lockdown measures in the city to slow the spread of Covid-19.

“I was stuck in Dubai and I wanted to create something poignant, something that would mean something,” he said on a video call from the hotel. “Something that could potentially make a really big difference.”

As well as the brushwork and drip-painting of Jafri’s own abstract style, which he dubs “magical realism,” the painting features work submitted online by children from around the world.

Centered on themes of connection, separation and isolation during the pandemic, the children’s contributions were printed out on paper and incorporated into the painting, where they are concentrated in eight circular “portals” on the canvas.

“I asked the children of the world to send in their artworks — how they feel now, their emotions,” Jafri said. “We, as adults, are finding this hard.

We found the last five months very difficult, very confusing, very frustrating and quite scary. But imagine how a 4-year-old child feels.”

The painting is expected to take 24 weeks to complete and comprises four sections.

The first represents “the soul of the Earth,” Jafri said, adding that the others allude to nature, humanity and the wider universe.

Once finished, the artwork will go on tour, which will see it hanging vertically in Dubai’s frame-shaped skyscraper and projected onto the world’s tallest building, the Burj Khalifa.

Here’s a look at the world’s largest painting. Upon its completion next month, the 1,980-square-meter artwork will be cut into 60 pieces, which painter Sacha Jafri is auctioning off in the hope of raising $30 million for charity. https://t.co/BC1uRfIRUa pic.twitter.com/WTHkCme8in

The painting will then be cut into 60 separate pieces, measuring approximately 30 square meters each, to be framed and sold individually at an auction in Dubai this December.

“We are aiming to raise $30 million, which will go to help the poorest children of the world with education, connectivity, health and sanitation,” Jafri said, adding: “Each person that buys a panel will (not only) own a piece of the largest painting ever created in the world, but they’ll own a piece of history, because what we’re doing with that money is huge.

“I can see big art collectors, big investors, big philanthropists spending up to $3 million or $4 million a panel.

“The project is part of the Humanity Inspired initiative, which is partnering with charities including Unicef and Unesco to assist children in need.

The 43-year-old artist, who was educated at the elite British boarding school Eton alongside Prince William, Duke of Cambridge, says the project has been endorsed by over 100 high-profile figures including Eva Longoria and Rita Ora.