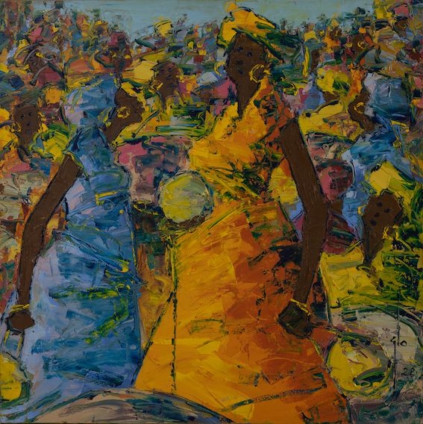 ARTSPLIT, a pioneering African art technology platform, has announced Bridges – the December edition of its modern and contemporary auction featuring three iconic works by Ghanaian artists from 2nd to 17 December.

The artworks will be available to access via the dedicated ARTSPLIT app and on public view at The Mix Design Hub in Accra from 11th to 16th December.

The auction follows the successful inaugural Modern and Contemporary African Arts (MOCONA) auction which took place in July 2022, and a recent November auction which coincided with Africa’s premier contemporary art fair, ART X Lagos where works by some of the continent’s most celebrated artists including Yusuf Grillo and George Pemba were sold.

This Bridges auction will continue ARTSPLIT’s efforts of creating better access and value for both emerging African artists and already established artists.

The auction will feature works by three Ghanaian artists; bold colourful paintings by Isshaq Ismail, the vibrant works of Ablade Glover that capture the joyous everyday life of Ghana, and finally Kofi Agorsor whose buoyant, semi-abstract and witty depictions of his subjects have received widespread international recognition.

The artists included in the auction bridge generations of artistic excellence, divulging an exploratory voyage into artistic skill, medium, and narrative across generations.

All three artists evoke emotions and canonise womanhood as an ode to the motherland, referencing sociocultural norms and features in their works and bridging generations of artistic mastery and skill.

These artists use their art to express resilience, inspire, reflect, and motivate change in the face of ongoing national and international challenges.

Ablade Glover’s work reflects his deep love of life, activity, and colour. Glover depicts animated landscapes that mirror the exuberant diversity of Africa: its bustling market stalls, brightly attired crowds and women, and the dynamic energy that is Ghana, using warm impasto pigments to express the dynamism, energy, and heat of his country. Mostly, his canvases are a love affair with Africa, generously evoking the continent’s struggle, tension, beauty, and verve.

The vibrant, bold colours used in Kofi Agorsor’s paintings depict the daily lives of modern Ghanaians; of spontaneity and order. His paintings are frequently embellished with splashes, drips, and flows of paint that intertwine to form magnificent forests or labyrinths, reflecting the interplay of music, dance movements, and geometry. He frequently employs pulsing colours to create an interpretation of the essence of contemporary Ghanaians; lived experiences set against the backdrop of entertainment.

Isshaq Ismail uses black, brown, green, red, ochre, purple, and blue to investigate and explore grotesque figures and textures. Ismail describes his process in sculptural terms, describing how he manipulates paint with thick, gestural brushstrokes in the same way a sculptor shapes clay. Through these striking and evocative works, he hopes to subvert and interrogate conventional notions of beauty. Representing the masses and advocating for the voiceless; his paintings explore themes of desire, resilience, power, and hope.

The ARTSPLIT app allows users to own fractions of prominent African artworks, also known as “Splits,” and keep or sell them on the app at the end of the Split Auction.

The Splits allow multiple people to co-own a single iconic piece of art, which no other art platform currently does. Users can also participate in a ‘Lease Auction’ on the app to win physical custody of these co-owned artworks for a set period.

The December auction follows the massive success of the November auction as well as the inaugural MOCONA auction held in July and attended by key figures in the Lagos art scene and exhibiting artists Edosa Ogiugo, El-Dragg Okwoju, and Abiodun Olaku.

DISCLAIMER: The Views, Comments, Opinions, Contributions and Statements made by Readers and Contributors on this platform do not necessarily represent the views or policy of Multimedia Group Limited.
Tags:
Ablade Glover
ARTSPLIT
Isshaq Ismail
Kofi Agorsor