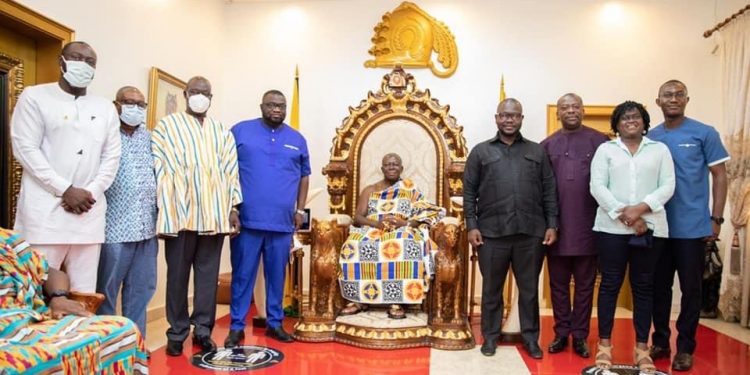 Asantehene, Otumfuo Osei Tutu II has lauded the State Housing Company for investments made to reduce the housing deficit.

According to him, the Company in the last four years had led the drive to provide affordable housing across the country.

The John Agyekum Kufuor Estate in Kumasi which is nearing completion is one of the projects the Asantehene points as key to improving the housing situation.

“Under the leadership of Kwabena Ampofo Appiah, the company is doing very well. I know of a housing project for the immigration service at Sunyani. It is an initiative we must encourage,“ Asantehene said to a delegation from the Ministry of Works and Housing led by Francis Asenso Boakye.

“He came to me for a land to construct more housing units in Ashanti Region, due to the work he has done so far, I granted it”, Asantehene said.

The State Housing Company’s move will form part of plans of the Ministry of Works and Housing to create affordable housing enclaves across the country.

The Ministry in this arrangement will build roads and provide social amenities to attract private developers.

With such intervention, it is believed the SHC together with private developers will build seven thousand affordable housing in the Ashanti Region at affordable cost.

A 200-acre land at Dedesua in the Ashanti Region provided by the Asantehene to build housing units will be the first enclave for the Region with the SHC as anchor developer.

Asantehene, however, urged the youth in the government to prove a case for the young people with perfomance in various positions.