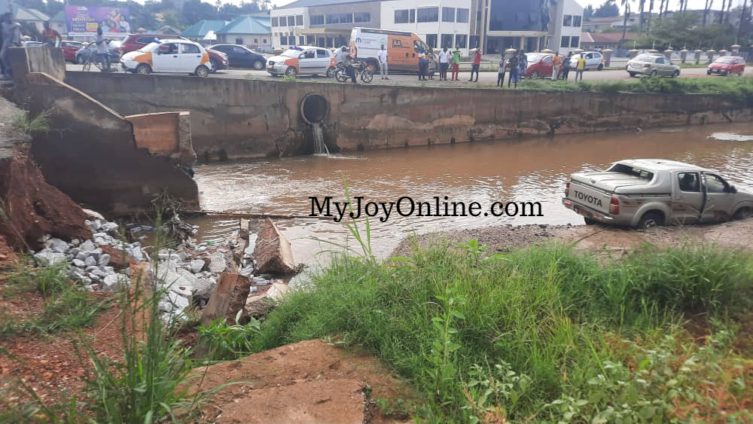 Four persons have been confirmed dead in Monday night’s flooding of parts of the Ashanti region.

According to the National Disaster Management Organisation, four bodies, including two nine-year-olds, have been retrieved, but two others who went missing at Ahenema Kokoben are yet to be found.

At least ten lives have been lost to flooding in the region since the beginning of the year. At Kromoase, a nine-year-old boy who went playing in the rain with two others, drowned on Monday.

At Daban, another girl of the same age died. The third incident and another death was recorded at Sokoban.

“Our men are still on the grounds teaming up with the community to find all the persons who have gone missing”, he said.

“The number we have so far, is coming from our men on the ground”.

Close to three hours of torrential rains left part of the Kumasi-Obuasi Road flooded for hours.

Two people who are still missing were part of a group of three who joined a KIA truck but jumped off as the floods pulled the vehicle to the wrong side of the road.

The flood left many people stranded for more than three hours. Residents are blaming poor construction and building in waterways for the flood.

It is the second time the area has flooded this year. Other areas of the city witnessed similar incidents. At Nhyiaeso, near Ahodwo, neighbours managed to rescue a man in his late 40s from drowning.

His pick-up truck was drawn into the stream after losing balance in the flood. Part of a recently-constructed bridge has caved in due to increasing flood.

DISCLAIMER: The Views, Comments, Opinions, Contributions and Statements made by Readers and Contributors on this platform do not necessarily represent the views or policy of Multimedia Group Limited.
Tags:
Ashanti Region
Flood
NADMO