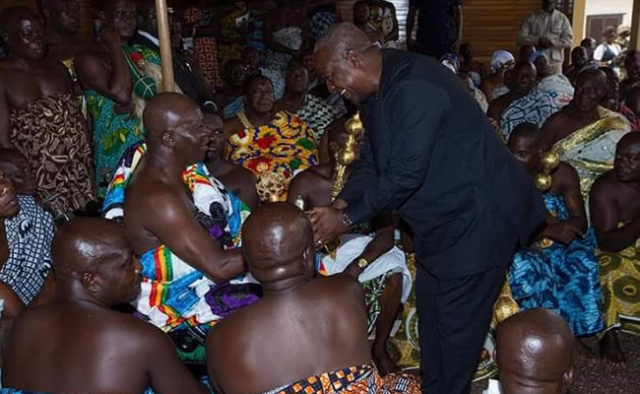 The Ashanti Youth Association (AYA) has condemned what it describes as gross disrespect shown to the Manhyia Palace and the President during the one-week observation of the late Asantehemaa.

Asanteman was in grief over for the death of  the Queen mother of the Ashanti stool Nana Afia Kobi Serwaa, Ampem II, the mother of Asantehene Otumfuo Osei Tutu II.

The solemnity of the occasion gave way to chants, hoots for President John Mahama and his biggest adversary in December's election Nana Akufo-Addo suggestive of a political campaign ground; indicative of the political season the country is engrossed in.

And it all happened at the Manhyia Palace, much to the chagrin of some chiefs.

Members of the Asante Youth Association blame the action of supporters of the New Patriotic Party (NPP) for what happened.

Speaking at a press conference Tuesday, Vice President of Association, Dr Ronald Ofori asked the Party to call its members to order.

He said their attention was brought to the fact that a "political grouping of some sort was responsible for heckling members of government who have come to mourn with us."

Dr Ofori said for them, it is unwelcomed and " an un-Ashanti act which we wish to categorically state that we frown upon such a behavior and that is not who were are as a people."

According to him, when serious matters such as mourning the Asantehemaa is on the table other acts of "vile political" nature must not be injected into it.

The Association is, therefore, calling on the NPP leadership to call their members to order as such incidents divide rather than bring people together.

But a leading member of the NPP and former Mayor of Kumasi, Maxwell Kofi Jumah says their accusation is childish.

In an interview with Joy News' Erastus Asare Donkor, he said the statement is "unfortunate, irresponsible statement and they should desist from tying in an august institution like chieftaincy."

Mr Jumah said there is no way the Party would apologise for anything as they did not hoot at the President adding it should rather be said the people of Kumasi hooted at Mr Mahama and not the NPP supporters.