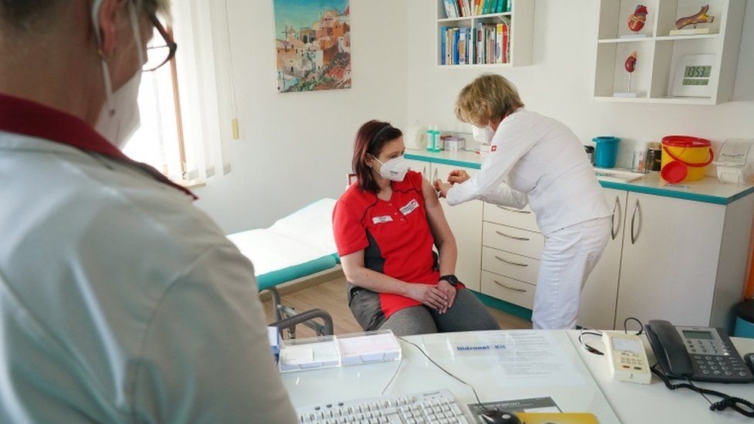 Some 13 European countries have paused their use of the vaccine

Countries around Europe are seeking further clarification on the safety of the Oxford-AstraZeneca Covid-19 vaccine, amid criticism of their decision to suspend giving the jab.

France, Germany, Spain and Italy have said they are awaiting an investigation by the EU’s regulator into reports of clots in a small number of recipients.

But other EU members, including Poland and Belgium, are continuing its use.

The European Medicines Agency (EMA) will release its findings on Thursday.

On Tuesday, the EMA said it was still “firmly convinced” of the benefits of the AstraZeneca drug. Its head, Emer Cooke, pointed out that blood clots highlighted by some countries were relatively common in the general population.

“I want to stress at present there is no indication that vaccination has caused these conditions,” she said.

Meanwhile, experts from the World Health Organization (WHO) were also meeting on Tuesday but a spokesman stressed there was “no evidence” that the reported blood clots were linked to the vaccine.

The WHO has urged countries not to pause their vaccinations. The suspensions come as much of Europe struggles to control rising cases.

In the UK, more than 11 million people have already received at least one dose of the AstraZeneca vaccine and there has been no sign of excess deaths or blood clots occurring.

What action are countries taking?

Some 13 European countries have paused their use of the vaccine. Denmark was first, followed by Norway and Iceland. Germany, France, Italy, Cyprus, Spain, Latvia and Sweden are the latest to follow suit.

On Monday, the three largest EU members – Germany, France and Italy – said they were awaiting the results of the EMA investigation before deciding whether to resume their rollout of the jab.

They said they had opted to pause their use of the drug as a “precautionary measure”.

“We expect some kind of verdict from the European scientific community by Thursday afternoon, allowing us to resume the campaign,” French Health minister Olivier Véran said on Tuesday.

“There were a few very unusual and troubling cases which justify this pause and the analysis,” French immunologist Alain Fischer, who heads a government advisory board, told France Inter radio. “It’s not lost time.”

In Germany, the health ministry also pointed to a small number of rare blood clots in vaccinated people when justifying its decision. It has postponed a summit on extending the vaccine rollout ahead of the EMA’s expected announcement on Thursday.

There is as yet no evidence that the specified clots were linked to the vaccine, and the EMA has said other factors are likely behind the incidents.

Other countries, including Austria, have halted the use of certain batches of the AstraZeneca drug, while Belgium, Poland, the Czech Republic and Ukraine said they would continue to administer the vaccine.

The decision to halt rollouts of the AstraZeneca vaccine has been criticised by some politicians and doctors.

Karl Lauterbach, a German epidemiologist and health spokesman for the centre-left Social Democrats, said while the pause was justifiable, it was also political.

“I would even now get vaccinated with the AstraZeneca. Based on the incidents we now know, the benefits of vaccination significantly outweigh the risks, particularly for the elderly,” he told Deutschlandfunk radio.

And Poland’s vaccination head Michal Dworczyk said countries that have paused their use of the drug “have succumbed to the panic caused by media coverage of alleged complications”.

How bad is the pandemic in Europe?

The intense divisions over the AstraZeneca jab come as much of the continent is struggling to contain a surge in coronavirus cases.

The rise has led many countries to tighten restrictions, and there are concerns over the pace of Europe’s vaccination drive which has already been affected by supply shortages.

German infections are growing “exponentially”, with cases up by 20% in the past week, an expert from the RKI public health agency warned on Tuesday.

While in France, Prime Minister Jean Castex said the widespread prevalence of three Covid-19 variants meant the country was now in “a sort of third wave”.

“The outbreak is going into extra time,” he told parliament on Tuesday.

Norway’s capital, Oslo, has announced tougher restrictions, while Italy and the Netherlands are both enforcing lockdowns.

Some 575,000 people in the European Union have died as a result of coronavirus, and the pandemic has taken a major economic toll.

DISCLAIMER: The Views, Comments, Opinions, Contributions and Statements made by Readers and Contributors on this platform do not necessarily represent the views or policy of Multimedia Group Limited.
Tags:
AstraZeneca
COVID-19 Vaccine
Europe
European Medicines Agency