At the feet of Jesus, Palace will crumble - MyJoyOnline.com

At the feet of Jesus, Palace will crumble 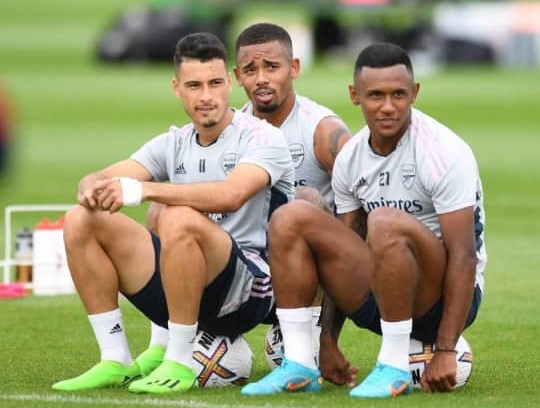 At one of the departure lounges at John F. Kennedy airport in New York, passengers on their way to Dublin, Ireland, a married couple, both in their late 60s, were locked up in a warm embrace, as other passengers look on.

The man placed his leg on the plastic suitcase, stroke the back hair on the back of the woman and winked.

He muttered something to the woman and they both laughed. The two caught my attention because the man was dressed in an arsenal Jersey with Gabriel Jesus written at the back.

The Brazilian forward joined Arsenal this season and has been on fire, albeit preseason; scoring for fan. He has so far scored in almost every game he has played in, including a hattrick against Sevilla in the Emirates cup in London.

A proven premier league winner, his arrival has sparked excitement within the fanbase and, for the very first time in a preseason friendly, Arsenal recorded high turnouts. From Baltimore in Maryland to Orlando in Florida, the fans kept salivating on his name.

“This kid looks really hungry, and I cannot wait for the season,” one fan said in an interview.

After we obliterated Chelsea by four goals to nothing in the final game before the team left the United States to London, the measured expectations within the fanbase could be felt, and even grabbed with both hands. The good vibes are back, I told a fellow fan.

“We got a gem,” said Andy, the Dublin native who extended his stay in America, after following the team around for the tour. “We are going to do something special and I have no doubt about that,” he told me.

Our brief conversation started when I said “Come On You Gunners” a globally accepted phrase among Arsenal fans, on my way to get something to eat. He turned towards his left, punched the air in acceptance and asked where I was from. “Ghana, West Africa,” I said. Many foreigners especially Europeans and Americans often confuse Ghana with Guyana, a country on South America’s North Atlantic coast.

“I know Ghana very well, kid, my son in law used to work for an airline that used to fly to Ghana” he said. He then talked Thomas Party’s Ghana’s connection.  We spent five minutes and within the period, we spoke candidly about the club we both love and how expectations for previous seasons had ended in disappointment.

“I struggled to accept we failed to pick the fourth spot for last season’s champions league,” I said to him. He expressed same thought but said we should always look at the “bigger picture” and what Mikel Arteta, the manager, is doing with “these young lads.”

He was confident the season will be good, considering what he saw during the tour, and how the team played. For most Arsenal fans who watched the games, the one against Chelsea, who play in this season’s champions league, was the perfect stamp needed to show the footballing the team is ready for the opening day, which comes off this evening against Crystal Palace.

The last time when the two teams met in their fixtures, Palace took four points out of the available six. It was a very hurtful defeat that some still maintain contributed to the club’s lack of champions league football. But more disturbing result for last season was against Brentford who beat Arsenal in the opening game of the season.

That game even prompted a rather strange tweet from Rwanda President Paul Kagame, a known fan and whose country pays £8m year in sponsorship to the team, who questioned the commitment of the team. His tweet was shared by millions of news outlets and blogs.

The vibe around the team even among supporters was one of hopelessness-but we persisted and missed out on a  Champions League spot by only a point. But looking at the signings that have so far come in, and reports that some additions may still be purchased, a good number of the fans, like Andy, are hopeful this season will be exciting. The new signings especially Jesus has gotten everyone confident of the new season.

“He’s our new Alexis Sanchez,” one fan said in a pro Arsenal twitter space.  Jesus’ situation is akin to that of Sanchez.

A good player whose qualities were overshadowed by Lionel Messi at Barcelona, he joined Arsenal, and he became a star man.

There is a firm conviction within the Arsenal fanbase Jesus will be that player, and today when we take on Palace, the fanbase, including Andy, will hope Jesus rains goals on everyone.