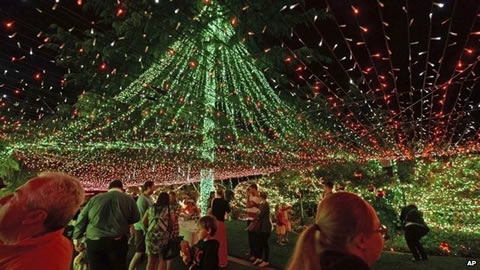 An Australian family have put up 502,165 Christmas lights around their home, setting a new world record.

The Richards family, in Canberra, set the record for the most Christmas lights on a residential property, Guinness World Records confirmed.

The father, David Richards, told reporters he had started working on the display in October.

The family first held the world record in 2011, before losing the title to a family in New York.

"I took a week off in [the] October school holidays and then have worked every weekend since," Mr Richards said.

"I have always loved Christmas. Having the Christmas lights with the community coming in and sharing it is a time when you get to know people you probably should know better," he added.

He did not rule out doing this again in the future, but said he would need a generator to get any more electricity for his home, AP news agency reported.

The family say they will open the display to visitors in the coming weeks, to raise money for a children's charity.