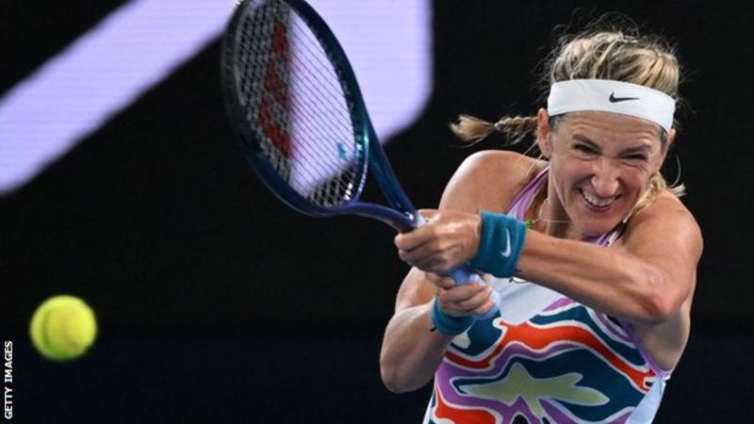 Victoria Azarenka continued her quest for a third Australian Open title – a decade on from her last – by knocking American third seed Jessica Pegula out in the quarter-finals.

Pegula was the highest seed left but must wait for a first Slam semi-final.

Rybakina, 23, fired 11 aces and 24 winners as she claimed a dominant victory over Latvia’s 17th seed Ostapenko.

The Kazakh, who is seeded 22nd, wrapped up victory in one hour and 19 minutes following a lengthy rain delay on Rod Laver Arena.

“I’m super happy to be in the semi-finals for the first time,” said Rybakina, the youngest player left in the women’s draw.

“Of course I was nervous, especially in the last game. I’m super happy I managed the emotions and I played really well today.”

Azarenka ‘creating new memories’ by not looking back

Having won back-to-back titles in 2012 and 2013, Azarenka is a player who thrives in Melbourne and showed it once again as she dismantled a below-par Pegula.

Despite her rich pedigree at Melbourne Park, Azarenka says she does not “really look back and think about” what she has achieved.

Instead she prefers to “create new memories” and applying this forward-thinking approach before the new season is paying dividends.

“I felt last year my tennis wasn’t bad but I was not mentally ready and played with fear and anxiety. It was difficult to play brave,” she said.

“I worked a lot on my mindset, challenging myself on things I wouldn’t really do before.

“When you have achieved great success, you can become conservative and and hesitant to try new things.

“I tried new things, put my head down and worked hard.”

A confident start full of clean hitting helped Azarenka move into a 3-0 lead and, after being unable to convert four set points and losing serve for 5-4, she broke again to clinch the opening set.

The second set was even more one-sided. Azarenka broke three times and conceded just 13 points as a despondent Pegula fell at the quarter-final stage of a major for the fifth time.

Rybakina serving up another deep run

Despite earning the most prestigious title of her career with her surprise success at Wimbledon, Rybakina dropped to 25th in the world – where she remains – because ranking points were not awarded at the grass court major.

She subsequently spoke about not feeling like a Grand Slam champion and began her Melbourne campaign on court 13 rather than a show-court.

Restored to the main stage at Melbourne Park, she followed up her stunning win over top seed Iga Swiatek with another devastating display against 2017 French Open winner Ostapenko.

“I think I got all the experience at Wimbledon and it’s helping me now this time here in Australia. I know what to expect,” Rybakina said.

In a meeting between two of the three major champions still standing among the last eight, Rybakina made a confident start as she broke 17th seed Ostapenko’s serve in the opening game.

She set up another opportunity in game five with her powerful shot-making before play was suspended by rain, returning after a wait of around half an hour to clinch a double break lead and ultimately serve out the set under the roof.

Ostapenko threatened a fightback with a break at the start of set two but Rybakina swiftly extinguished those hopes, recording successive breaks in reply to bring her second major semi-final into focus.

She went on to seal the match in fitting fashion, sending down a final ace to extend her tournament-leading tally to 35.

DISCLAIMER: The Views, Comments, Opinions, Contributions and Statements made by Readers and Contributors on this platform do not necessarily represent the views or policy of Multimedia Group Limited.
Tags:
Australian Open
Elena Rybakina
Jelena Ostapenko
Jessica Pegula
vICTORIA Azarenka