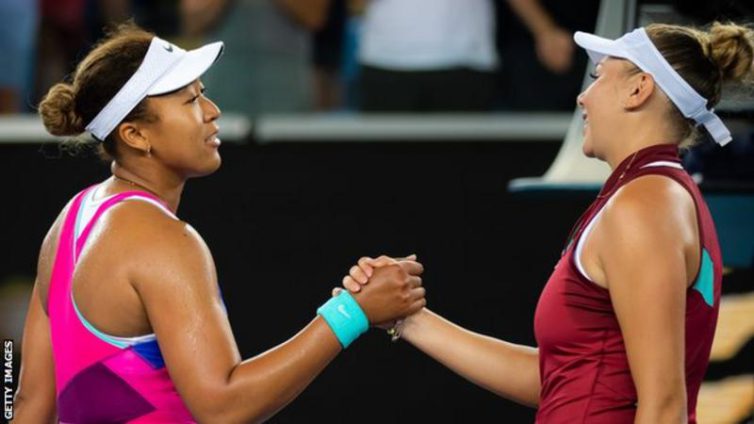 Naomi Osaka says she feels “proud” of her approach and performance as she put the defeat which ended her Australian Open title defence into perspective.

Osaka, who was seeded 13th, twice took long breaks from the tour last season to protect her mental health.

“I fought for every point. I can’t be sad about that. You know, I’m not God. I can’t win every match,” she said.

“So I just have to take that into account and know that it would be nice to win the tournament.

“But that’s really special, you know, and I can’t think of myself to try to win the Grand Slam at the start of the year every time.”

Four-time Grand Slam champion Osaka took a break from tennis after losing to eventual finalist Leylah Fernandez in the third round of September’s US Open.

That came after a turbulent year in which she said she would not do news conferences at the French Open to protect her mental health.

She later pulled out of the Grand Slam event and revealed she had experienced anxiety and depression since winning her first Grand Slam title in 2018 aged just 20.

Osaka also did not play at Wimbledon but returned to compete in the Tokyo Olympics, Cincinnati and US Open before taking the second break.

At an Australian Open warm-up tournament earlier this month, she said her main target for 2022 was “having fun” on the court.

Osaka, who also won the 2019 title, eased through her opening two matches at Melbourne Park and looked in command against Anisimova before her 20-year-old opponent turned the match around.

“For me, I feel like I grew a lot in this match,” said Osaka.

“The last match that I played in New York I think I had a completely different attitude.

“It’s always random, and I never know, but no matter what happens for me, I just want to leave the court knowing that I fought for every point.

“Today, of course there were things I felt I could improve on, but even with that, I had two match points, and I think that’s something that I can be proud of myself for.

“I think this for me is the biggest step, even though I lost. I think I was really focused throughout the entire match, and I didn’t have a dip. So that’s really good.”

DISCLAIMER: The Views, Comments, Opinions, Contributions and Statements made by Readers and Contributors on this platform do not necessarily represent the views or policy of Multimedia Group Limited.
Tags:
Amanda Anisimova
Naomi Osaka