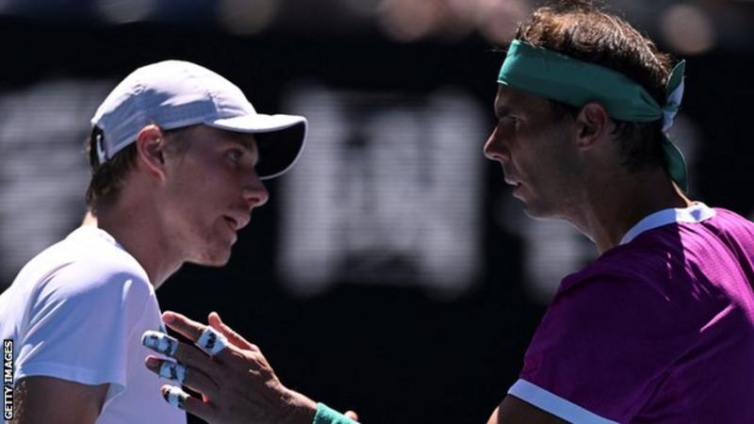 Rafael Nadal is “100%” given preferential treatment by umpires, claimed Denis Shapovalov after his defeat by the Spaniard in their Australian Open quarter-final.

Shapovalov was unhappy with the amount of time he thought Nadal was taking between points and twice complained to umpire Carlos Bernardes.

“I think it’s unfair how much Rafa is getting away with,” said Shapovalov.

In reply, 35-year-old Nadal said: “I believe he is wrong in this case.”

Shapovalov, 22, lost in five sets to 20-time Grand Slam champion Nadal at Melbourne Park on Tuesday, having fought back to level after going two sets down.

At the start of the second set, Shapovalov asked Bernardes to give a time violation to the sixth seed.

When the official did not see fit to do so, Shapovalov shouted: “You guys are all corrupt.

In his post-match news conference, 14th seed Shapovalov said he “misspoke” during the match with emotions riding high but still stood by the wider point.

Players are allowed 25 seconds between points and two minutes between sets, all timed by a shot clock.

Asked whether he thinks Nadal receives preferential treatment, Shapovalov said: “Of course – 100% he does, 100%. Every other match that I have played, the pace has been so quick because the refs have been on the clock after every single point.

“I’m completely ready to play and the clock is ticking 3, 2, 1, clicking towards zero.

“I’m looking at the umpire and obviously I’m going to speak up and say something.

“I’ve been ready to play for a minute and a half, and he tells me he’s not going to give him a code violation because I’m not ready to play. To me, it’s a big joke if somebody says that.”

Shapovalov added: “I respect everything that Rafa has done and I think he’s an unbelievable player. But there have got to be some boundaries, some rules set.

The first complaint came after Nadal changed his kit at the end of the first set and Shapovalov remonstrated with Bernardes again before the second game about how long Nadal was taking to serve.

“I know I took some extra time at the end of the first set because I had to change everything there on the chair in the changeover,” said Nadal, who won his only Australian Open title in 2009.

“It’s obvious you can’t play with the clothes in the condition that I was. After that, I was going through all the rules.”

On Shapovalov’s claim he received preferential treatment, Nadal added: “I really believe it’s always in the mind that the top players get bigger advantages and honestly on court is not true.

“I never feel that I had advantages on court, and I really believe that he’s wrong in that case.”