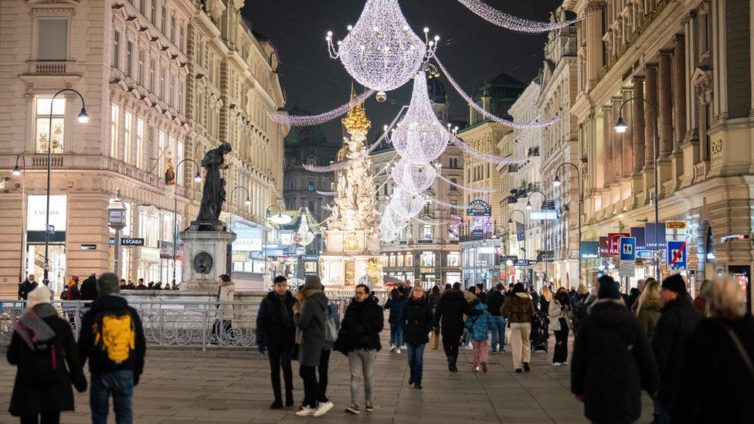 About 65% of Austria's population is fully vaccinated

About two million people who have not been fully vaccinated against Covid-19 have been placed in lockdown in Austria as the country faces a surge in cases.

“We are not taking this step lightly, but unfortunately it is necessary,” Chancellor Alexander Schallenberg said.

Unvaccinated people will only be permitted to leave home for limited reasons, like working or buying food.

About 65% of Austria’s population is fully vaccinated – one of the lowest rates in Western Europe.

Meanwhile, the seven-day infection rate is more than 800 cases per 100,000 people, which is one of the highest in Europe.

Overall, Europe has again become the region most seriously affected by the pandemic and several countries are introducing restrictions and warning of rising cases.

However, the UK, which has one of the highest Covid-19 infection rates, has yet to reintroduce restrictions, despite health leaders calling for rules like mandatory face coverings in crowded and enclosed spaces to be brought back to avoid a winter crisis.

The measures introduced in Austria on Monday, which come amid growing pressure on the nation’s hospitals, will initially last for 10 days.

Children under the age of 12 and people who have recently recovered from the virus will be exempt.

Over the weekend, hundreds of people protested outside the chancellery in the capital, Vienna, waving banners that read: “Our bodies, our freedom to decide.”

One female protester said she was demonstrating “to fight for my rights”. “It is totally discriminatory what is happening here,” she said.

But Prof Eva Schernhammer of the Medical University of Vienna, said the measures were needed, warning that hospital intensive care units were filling up. “It’s already projected that within two weeks we’ll have reached the limit,” she said.

Unvaccinated people were already barred from visiting restaurants, hairdressers and cinemas, but will now be expected to stay at home.

“In reality we have told one third of the population: you will not leave your [home] apart from for certain reasons,” Mr Schallenberg said.

“That is a massive reduction in contacts between the vaccinated and the unvaccinated.”

The government says police will carry out spot checks in public spaces to determine the vaccination status of individuals, and issue fines to those caught breaking the rules.

There was a last-minute rush at vaccination centres in Upper Austria on the eve of the new restrictions.

But critics have questioned whether the move is constitutional. The far-right Freedom Party has said it will create a group of second-class citizens.

In neighbouring Germany, where Health Minister Jens Spahn has warned of a pandemic of the unvaccinated, the federal government and state leaders are due to meet later this week to discuss possible new restrictions.

Germany’s 67.3% vaccination rate is higher than in Austria, but not by much. Germany has designated Austria a high-risk area, meaning anyone arriving from the country must go into quarantine.

In the Netherlands, “lockdown-lite” measures have been imposed to limit social contacts in response to a sharp increase in infections.

The measures include early closing for restaurants and shops, and barring spectators from sporting events.

About 84% of Dutch adults have been fully vaccinated. Most patients in Dutch hospitals have not had their jab.

Vaccination rates are significantly lower in some eastern European nations.

Latvia, where 59% of the population are fully vaccinated, re-imposed lockdown last month and has banned lawmakers who refuse the vaccine from voting on laws and taking part in debates until the middle of next year. They will also see their pay docked.

In Russia, only about 35% of the population has been fully vaccinated, according to Our World In Data. At the end of October, Moscow shut shops, restaurants and schools in a partial lockdown and workers were given nine days paid holiday to curb infections.

Some other countries are also introducing measures applying only to the unvaccinated. In Australia, the state of Queensland will bar unvaccinated people from restaurants, pubs and sports events from 17 December.

And Singapore has said that those who remain unvaccinated by choice will have to pay for their own medical bills from December.

DISCLAIMER: The Views, Comments, Opinions, Contributions and Statements made by Readers and Contributors on this platform do not necessarily represent the views or policy of Multimedia Group Limited.
Tags:
Austria
Covid-19
Lockdown