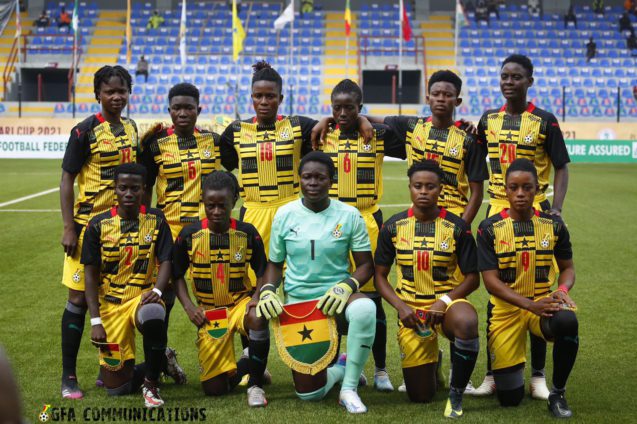 The Black Queens will, on Wednesday, play against the Super Falcons as the pursuit of a place at the 2022 Women’s Africa Cup of Nations begins.

The fierce rivalry between Ghana and Nigeria will be rekindled at the Mobolaji Johnson Arena in the first leg of the tie. Team Ghana arrived in Nigeria on Monday.

The African Women’s Cup of Nations, which will be hosted by Morocco next year, will see the absence of one of these two countries giants. This is the case because of the new qualification format introduced by CAF.

The game will also serve as the ticket of qualification for the 32-team FIFA World Cup finals in Australia and New Zealand in 2023.

There have been 17 previous encounters between the two teams, with the Super Falcons boasting of nine wins as against Ghana’s three.

For Nigeria, tomorrow’s game will be an opportunity to qualify for their 12th AWCON while Mercy Tagoe will be hopeful a shock win will propel the Queens to the continental showpiece, which will also be Ghana’s 12th.

Nigeria come into this game having suffered a disappointing end to the Aisha Buhari Cup, where they lost to South Africa 4-2 in the final.

Ahead of Wednesday’s meeting, Super Falcons boss Randy Waldrum has highlighted its importance.

“It is important for us to get a good win at home and then go to Accra and play like warriors. The Super Falcons just have to be at the AFCON and the World Cup and they are ready to give these two matches they’re all,” Waldrum explained to the NFF media.

Despite the Super Falcons superiority over the Queens in recent times, president of the Ghana Football Association, Kurt Okraku has thrown a challenge to the team to put their quality into use to achieve the needed results.

“Nigeria has given us lot of problems in the past same way we also have been their nightmare in the past too but I believe with the quality of players we have, we can face any opponent and win,” he told team prior to their departure for the crunch game.

Coach Tagoe will go into the crucial fixture with some key players missing.

Elizabeth Addo, Sherifatu Sumaila, and Eunice Berkmann are all unavailable for the game while Nigeria’s Waldrum has almost all of his top players ready for the game including Barcelona’s Asisat Oshoala.

Despite, criticism leveled at the call-ups, the Black Queens are keen to take away at least a draw from Nigeria before finishing things off at the Accra Sports Stadium next week.

Nigeria won the last edition of the Women’s Africa Cup of Nations which was hosted in Ghana in 2018, beating South Africa on penalties to claim the title.