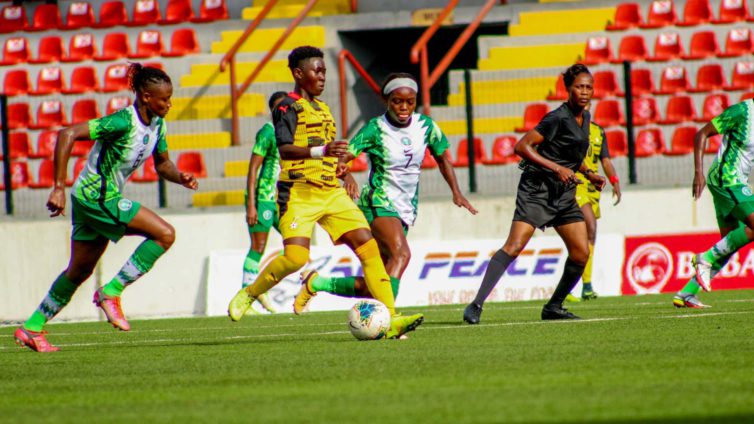 Ghana have been eliminated from the 2022 Africa Women’s Cup of Nations qualifiers despite beating Nigeria 1-0 in Accra on Sunday.

Princella Adubea scored the only goal of the game as she after slotted home from close range after receiving a through ball early in the second half.

Ghana coach Mercy Tagoe-Quarcoo largely kept faith with the side that started in the first leg, offering starting places to Djurgardens ace Portia Boakye and the Spain-based duo of Adubea and Grace Asantewaa.

The Black Queens needed to score twice to stand any chance of overturning the first-leg result and started on the front foot, creating a number of chances.

Tagoe-Quarcoo’s girls failed to capitalise on their early dominance as the game was deadlocked at half time.

Minutes after the restart, Adubea took her opportunity as she calmly finished after being put through on goal.

The goalscorer almost got her brace moments later but her header, having connected to a free-kick, struck the bar.

The Black Queens kept piling pressure on their West African counterparts but suffered a setback halfway through the second half as Boakye received her marching orders for a second bookable offence.

The Nigerians’ numerical advantage, however, lasted only for 10 minutes as Glory Ogbonna was sent off in the 75th minute for a reckless challenge on Naomi Animah.

After an injury-time goal-mouth scamble, which saw Ghana hit the bar again in what was the last significant action of the game, the referee brought the game to an end.

Nigeria, who are the defending Afcon champions, booked their ticket to the final round of the qualifiers as they seek complete qualification for the final tournament which will be hosted in Morocco.