Awesome night of Gold Frankincense and Myrrh at Osu ICGC 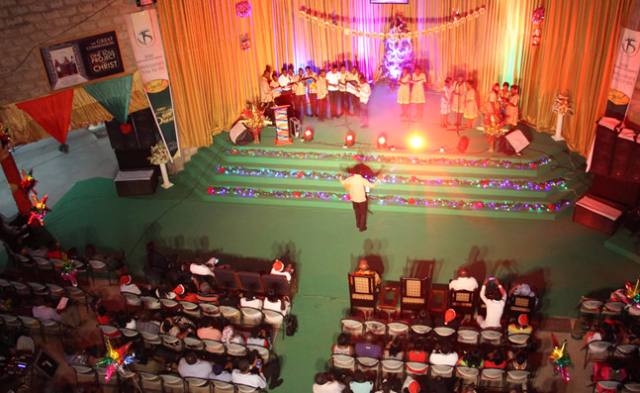 The night was not silent but it was holy. The venue was not in Bethlehem; it was in a Temple in Osu.

It was an awesome night of sweet Christmas melodies, drama,  interspersed with nine great bible lessons at the Osu Restoration Temple of the International Central Gospel Church to officially mark the beginning of what will be an enthralling line up of Christmas and New Year's activities for the Osu based church.

With the Temple packed, the congregation expected nothing less than an awe-inspiring carols night of fun, dance, and praises to God for yet another year. It was also an ocassion to remember the birth of the savior Jesus Christ. And what better way to do that than through a reenactment of the amazing story of the birth of Christ?

The Inspired Heavens teamed up with the youth department of the Church to deliver a brief, yet soul inspiring account of the birth of Christ and the symbolic  significance behind it.

Then the Restoration Choir took over. One after the another they sang the Christmas hymns and got the congregation on its feet.

Dubbed the night of Gold Frankincense and Myrrh, Christmas was in the air. Handkerchiefs flew, feet were tapping and dancing to the great songs sang by the choir; the atmosphere was angelic.

Then came Wendy with her immaculate rendition of Kenny Rogers and Wynnona Judd's Mary did You know. A perfect song for the occasion, well delivered.

The lighting, the decorations and the stage effects added to the ambiance of the ocassion. It was pleasing to the eye.

Other performers on the night include Ike Nanor.

Head Pastor of the Restoration Temple, Rev Ashford Smith in a closing remark charged Christians to focus on the significance of the birth of Christ rather than the merry making that comes with it.

He called for moderation and a judicious use of resources during the period of the Christmas celebrations.

The Church will organise service on the morning of Christmas and will host its annual crossover service on the 31st at the Restoration Temple in Osu.