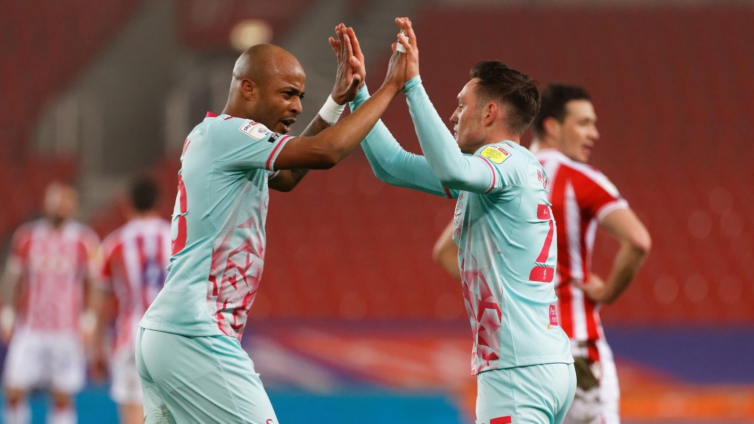 Andre Ayew’s late penalty grabbed a 2-1 away victory for Swansea City over Stoke City in the Championship on Wednesday.

The Ghanaian’s 90th-minute effort proved the decisive factor in the matchday 34 away fixture at Bet365 Stadium.

The three points consolidate the promotion play-off spot of fourth-placed Swansea, who have two games in hand and sit 11 points below league leaders Norwich City.

Ayew, who was also on target on Saturday, has taken his goals tally to 11 for the season, having featured in 32 matches and started in all but one of the games.

He is now five goals shy of equalling last season’s goal haul, which saw him finish the campaign as the club’s top scorer, and helped earn him the Most Valuable Player honour at the club’s End of Season Awards.

Nick Powell put Stoke in the lead in Wednesday’s game, pouncing on a loose ball to strike past Swansea goalkeeper Freddie Woodman in the 6th minute.

The visitors fought back to draw level in the 19th minute through Connor Roberts who beat his marker to steer the ball into the net after connecting to Ryan Manning’s cross.

With the game headed for a draw, Swansea earned a late opportunity to claim all three points when referee David Webb pointed to the spot after substitute Jack Clarke tripped Kyle Naughton.

Ayew bravely stepped up and coolly drove the ball into the net from 12 yards in the sixth minute of injury time to put his side in the driving seat.

Swansea will hope to keep their foot on the pedal with three more points when they host Middlesbrough on Saturday.

The Ghana captain’s scoring form will delight national coach CK Akonnor who is set to lead the Black Stars into a 2021 Africa Cup of Nations qualifying double-header against South Africa and Sao Tome and Principe on March 25 and 28 respectively.

Currently top of Group C, Ghana need a win in one of the two games to book their qualification for Cameroon 2021.

Ayew has scored four goals in his last two appearances for the West Africans.

DISCLAIMER: The Views, Comments, Opinions, Contributions and Statements made by Readers and Contributors on this platform do not necessarily represent the views or policy of Multimedia Group Limited.
Tags:
Andre Ayew
Championship
Swansea City