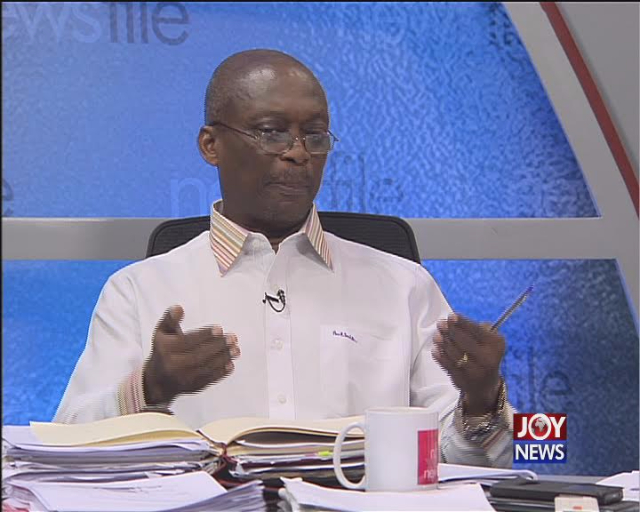 The Editor-In-Chief of the New Crusading Guide Newspaper has panned the Ashanti Regional Chairman of the New Patriotic Party (NPP) for allegedly assaulting a constituency Chairman and a Member of Parliament.

Abdul Malik Kweku Baako, speaking on Joy FM and Multi TV's news analysis programme, Newsfile Saturday, expressed disappointment in Bernard Antwi Boasiako for his actions even though the allegations are yet to be proven.

Bernard Antwi Boasiako allegedly slapped the Member of Parliament for Manhyia North and assaulted the Constituency Secretary, Felix Ibrahim on May 1 during the first phase of the Limited Voters' Registration exercise in Kumasi.

Mr Boasiako who is popularly known as 'Chairman Wuntumi was detained for a night after he turned himself in to the Police in Kumasi, Tuesday, May 3.

Some supporters of the NPP besieged the Central Police Station to demand his release. He was arraigned before court and charged with assault.

He was granted a 20,000 bail on Wednesday after the complainants withdrew the complaints and asked for out of court settlement.

Although the Chairman has denied assaulting the two, Mr Baako said he believes there was a form of assault on the two victims by the Chairman.

According to him, it has been stated in the brief facts that some policemen rescued the two complainants from the Chairman during the incident.

He indicated that "there were eyewitnesses, the two were given medical forms by the police to go to the hospital and are undergoing treatment, these are of evidential value. I don't think a ghost came from nowhere to assault the two guys. Nobody can convince me otherwise, so something went wrong."

The Veteran Journalist also condemned the conduct of the party supporters who besieged the police station, saying "That is no prescription for whatever you perceive as an infraction of his (Antwi Boasiako's) right."

Kweku Baako added that the actions of the regional party Chairman and the supporters have a negative effect on the image of the party both in the region and at the national level.

Contributing to this topic on the same platform, the Member of Parliament for Tamale Central Constituency, Alhaji Inusah Fuseini lambasted the NPP for not openly condemning the conduct of the Chairman.

Alhaji Fuseini who is also a lawyer said the differences between the three could have been resolved in an amicable way. He criticized the State-owned newspaper, Daily Graphic for publishing the story about the Chairman's bail on its front page.