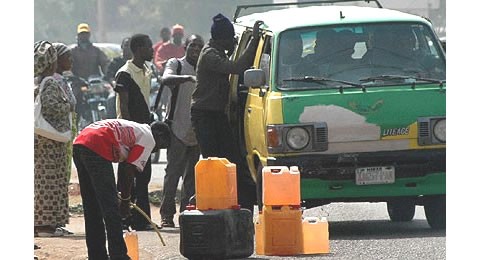 Former military president, Gen. Ibrahim Babangida, has joined millions of Nigerians protesting against the removal of fuel subsidy by the Federal Government, saying that the action is ill-timed.

This came as hundreds of youths also took to the streets in Kano in a peaceful protest against the fuel subsidy removal.

Another group made up of students also showed their objection to the Federal Government’s action on the streets of Abeokuta, Ogun State Monday.

Babangida advised the government to seek political solution to the removal of the subsidy instead of the present economic solution. He also urged President Goodluck Jonathan to shun bad advisers and praise singers.

He argued that the Federal Government should have waited till April this year to allow for further consultation on the matter and to also allow the input of the National Assembly to make the removal of the fuel subsidy a participatory action.

In a statement signed by his media spokesman, Kassim Afeguba, titled: “State of the Nation”, Babangida said: “On the issue of fuel subsidy removal, it is my opinion that it is ill-timed. The issue of subsidy should be seen more as politics and not economics, because the sole purpose of government is for the good of the people and not to create hardship.

“It is better to seek political solution to the subsidy discourse than invoking the sentiments of economics. Government should have kept its word till April by which time better explanation would have been given before implementation takes effect.

“The National Assembly should have been made to be part of the decision-making process since the 2012 budget is yet to be discussed and passed by the Legislature.

“Every government should ordinarily take the interest of her people at heart so that the reason for its existence would be justified.”

According to him, “I will insist that a political solution be sought in resolving the issue so that a mutually agreeable position would be reached between the leaders and the people. This exclusive decision of the executive arm of government does not speak well of the tenets and principles of participatory and all-inclusive democracy.”

Babangida, who also blamed the crisis in the country on what he called failure of leadership at all levels, cautioned against taking actions that could result to war or further security challenges. He called for dialogue in resolving the present crises in the country.

The former military president said: “For those of us who have seen wars in different places and countries especially on account of our training and background, no nation pushes for war when there are several options to be taken.

“We must therefore engage in dialogue and wider consultations in our resolve to providing lasting solutions to the challenges facing us. All our religious leaders, political leaders, traditional rulers, opinion molders, the media, must unite to arrest this ugly phase of our political life.

“We must desist from name-calling, name-dropping and apportioning blame on anyone when faced with a challenge. Our capacity to live together must be demonstrated at all times so that the country can nurture its national objectives without equivocation. We must therefore share in the national aspiration and be more forthcoming in our anti-corruption crusade.

“As a former President for eight years and someone who survived eleven major crises in the country, both ethnic and religious, I can appreciate the enormity of the challenges facing Mr. President. I want to reassure Mr. President of my support, as I wish him a happy and prosperous new year.”

Meanwhile, the leader of the Kano protesters, Bala Hassan Garba, has given the Federal Government a 24-hour ultimatum to reverse the decision or face a shutdown of all the filing stations that accept the new pump price.

Garba said the decision by government to remove fuel subsidy at a time Nigerians were mourning the death of scores of bomb blast victims as well as grappling with “unprecedented” insecurity challenges across the country was not only “callous and insensitive”, but intended to “cause anarchy”.

The demonstration, which was peacefully staged at Sabon Titi, Mandawari and Tal’udu quarters of Gwale in Kano metropolis, also described the Peoples Democratic Party (PDP) of lacking the capacity to lead the country.

The youths also displayed different placards with the inscription: “No to subsidy removal”, and “Jonathan you want to kill Nigerians”, among others.

In Abeokuta, students under the aegis of National Association of Nigerian Students (NANS) also staged a peaceful protest along the major streets in the metropolis over the removal of fuel subsidy, calling on President Jonathan to immediately reverse the decision or face their wrath.

National Public Relations Officer (PRO) of NANS, who led the protest, Mr. Clement Olusegun, asked the Federal Government to reverse itself or face the wrath of the students.

The placards carried by the students had different inscriptions, including: “Return Fuel Subsidy Now”; “Mr. President I have no shoe, No to fuel Subsidy Removal”; “Petroleum subsidy removal: A hardship policy”; and “ASUU strike unresolved, why removal of fuel subsidy?”

According to Olusegun, the protest would continue in all the streets of the nation until the president rescinds his decision on fuel subsidy removal.

He said: “We are saying no to this anti-masses and anti-students policy of Mr. President by removing the subsidy; we want to tell the president that if the statement is not reversed, we will go to all streets in this country and we will make this country ungovernable for him.

“If Jonathan fails to reverse the increment, we will continue until he listens to the voice of the masses; we are even looking for ways to reduce the N65 now there is another increment.”