Looking at 22-year-old Ian Francis Manga’s face it’s easy to see why some people have a hard time believing he is a kindergarten teacher, and not a student himself. Luckily, he towers over the children, but his face still looks uncanny.

A teacher in San Jose Del Monte, the Philippines’ Bulacan province, Ian Francis Manga has always looked younger than his years, and that became even more apparent in middle-school, when all the other boys started growing mustaches and armpit hair, but he did not experience any of the changes of puberty. In fact, his facial features remain those of a very young boy, but because he never suffered bullying from his schoolmates, he never felt the need to see a doctor and learn if there was anything wrong with him.

According to a report by Stand for Truth, Ian believes that his delayed growth may have been caused by the fact that he was always a sickly child. Still, he managed to overcome his health problems and passed his kindergarten teacher exams to become part of the faculty. He is in charge of the kindergarten and grade 2 classes at the Mater El-Roi School Inc., and the school administrator says “he is fitted for the job and he loves the children”.

Manga said that most of the children in his care consider him an older brother, but added that he goes to great lengths to overcome his baby-faced appearance and be perceived as a teacher. For example, he always wares baggy clothes and stiff leather shoes to make himself look like a proper adult. 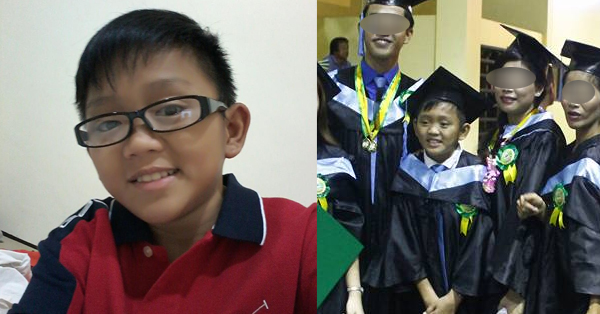 “As a teacher, you need to serve as a model. You need to look the part despite being baby-faced,” the 22-year-old told Stand for Truth. “When I’m teaching, I will become more serious. They also take me more seriously.”

Apart from his baby-face, Ian Francis Manga also has a very childish voice and measures only 162cm. He admits that while his schoolmates never bothered him, his childish appearance did sometimes make him the target of cruel jokes, adding that some people still tease him by calling him “little boy”. He has always tried to ignore such remarks, but claims that deep inside they only pushed him to work harder and prove to everyone that he could become a respected member of the community.