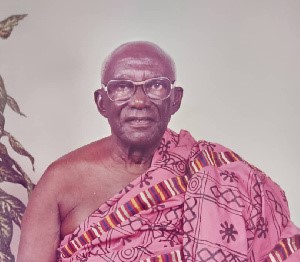 According to him, the late former Senior Okyeame of the Asantehene played a crucial role in protecting the country’s traditional institutions from dissipation.

He made these comments at the Ghana School of Law’s ‘Re-Akoto Memorial Lectures’ at the Kwame Nkrumah University of Science and Technology on Wednesday.

The event seeks to promote research, study and educate the citizenry on the development of Ghana’s constitutional democracy and human and people’s rights.

Honouring Baffour Osei Akoto’s legacy, Mr Afriyie Akoto said the late statesman who is also his father, was a powerful force in chieftaincy and cultural affairs in the country.

“As a traditional ruler, Baffour Osei Akoto, the senior Okyeame of the Asantehene paid an instrumental role in helping to deepen chieftaincy and culture.

He further explained that; “even his going into politics was driven by his resolve to help sustain the legality of Ghana’s traditional institutions.”

The Memorial Lecture was instituted by the Asantehene, Otumfuo Osei Tutu II as life patron of the Student Representative Council (SRC) of the Ghana School of Law.

Speaking on this year’s theme: ‘The legacy of Baffour Osei Akoto: A Family Man, A Chief and A Statesman’, Mr Afriyie Akoto said that the former chief linguist was someone who exemplarily portrayed the qualities of an Okyeame.

“He succeeded in resisting the effort to reduce the prestige in authority of the Ghanaian chief. By Akan tradition, the Okyeame is endowed with skills of oratory with a mastery of the language.

“To a very large extent, he must also be knowledgeable about the history of the state, and must be at the apex of these traits to be the Okyeame of the Asantehene,” he added.

On the back of these, the Agric Minister and son of Baffuor Akoto in whose memory the lecture was held, expressed surprise that his father is not recognized for his role in the founding of the NPP and the development of politics in Ghana.