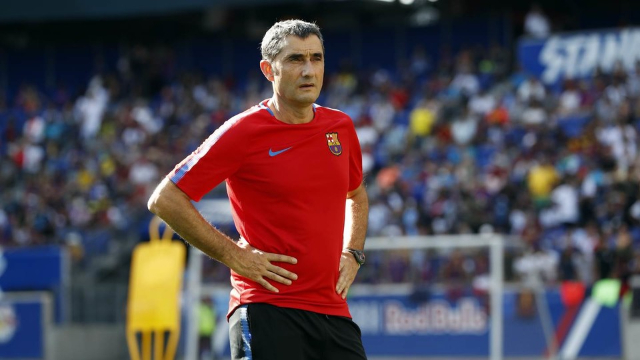 Ernesto Valverde says Barcelona are under as much pressure as Real Madrid going into Saturday's Clasico at the Santiago Bernabeu despite having more room for error.

Barca are unbeaten in 24 games in all competitions and have built a six-point lead at the top of La Liga, with Madrid 11 points back in fourth place having played a game less.

Madrid midfielder Toni Kroos has said his side must beat Barca to keep the title race alive and the general consensus is that the game carries more importance and pressure for Zinedine Zidane's side.

However, despite the cushion his side have in the league, Valverde dismissed the suggestion the game would be almost a free hit for Barca.

"No, we're both under pressure for this game," the coach said in a news conference on Friday. "By pressure, I mean because of what the game means. I don't think it's a decisive factor the fact that [Madrid] are further behind and have to win.

"There are enough other factors surrounding this game for there to be as much pressure for both sides."

Asked if a win could prove decisive in the title race, he added: "We haven't won [the game] yet and Atletico [Madrid] are just six points back.

"If we don't win, and [Madrid] do, the difference would be three points [with Atletico]. We need to take things game by game, treat it like any other game and go for the three points — nothing is in stone until the season is over."

Barca were beaten 5-1 on aggregate by Madrid in the Spanish Super Cup in August and Valverde has watched those games back this week, as well as last season's meetings in La Liga, in preparation for the game.

"We made mistakes — to their credit because they forced errors. So we need a good start and then we have to impose our rhythm on the game. We need to go out to try and win the game from the off."

There are no surprises in Valverde's squad for the trip Madrid, with Ousmane Dembele, Rafinha and Gerard Deulofeu all missing out despite training on Friday.

Samuel Umtiti and Paco Alcacer are both missing with injuries, while Arda Turan, who has not played a competitive match this season, is also absent.

Thomas Vermaelen is expected to partner Gerard Pique in defence, with Paulinho, who has scored six goals this season, starting in a four-man midfield with Sergio Busquets, Ivan Rakitic and Andres Iniesta behind Lionel Messi and Luis Suarez.