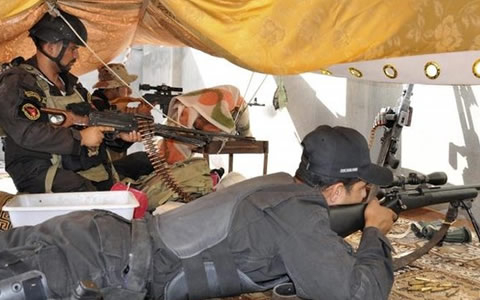 Iraqi forces have repelled counter-attacks by so-called Islamic State (IS) as they push the group into a corner of Mosul's Old City.

IS deployed large numbers of suicide bombers in different parts of the northern city but the affected areas were quickly brought under control, Iraqi officials say.

The Iraqi offensive to remove IS from the city is in its final phase.

The operation to retake Mosul, seized by IS in 2014, began last October.

The government announced the liberation of the eastern half in January 2017, but the west of the city, with its narrow streets, has proved more difficult.

Nevertheless, IS is now confined to 2.5 sq km (a square mile) of territory.

At least two IS counter-attacks were reported on Sunday night. The Baghdad-based Kurdish Shafaq news agency reported three attacks by the group in western Mosul – in al-Tanak, Rajm Hadid and al-Yarmouk districts.

Residents' houses were set on fire, the agency said.

What is clear is that these are the dying days of IS in Mosul.

There has been a strong uptick in the Iraqi government offensive in recent days.

There were 20 air strikes on Sunday, with helicopter gunships pounding IS targets and a great deal of mortar fire. Counter-attacks by IS involving suicide bombers were dealt with swiftly.

IS fighters are pinned down in a corner of the Old City. It was expected that the last few yards of this conflict would be the hardest in an area where battle-hardened, largely foreign jihadis have dug in with defences including tunnels.

One soldier from the forces we have been filming with said they had faced 80 suicide bombers in four days.

Tens of thousands of civilians are believed to remain trapped in the Old City.

As for the number of IS fighters still there, estimates from the Iraqi military and analysts vary from 200 to 350.

The increasing pressure on IS comes less than a week after the group blew up the city's al-Nuri mosque and its landmark crooked minaret.

Prime Minister Haider al-Abadi said the destruction of the mosque, which was more than 800 years old, was "an official declaration of defeat" by IS.

The mosque was the scene of IS leader Abu Bakr al-Baghdadi's only public appearance, when he demanded allegiance to his "caliphate" in July 2014.

The offensive against IS in Mosul, the group's biggest and last urban stronghold in Iraq, was launched on 17 October 2016.

I was just a couple of streets away from one of the IS counter-attacks.

We had about 20 bodies (Iraqi soldiers) here yesterday and many more injured. In fact the trauma stabilisation point (TSP) is full of soldiers right now. A brigadier arrived with a bullet in his neck yesterday afternoon and it was shortly after that everything went a bit crazy.

There were cars set alight and roads were closed.

According to sources here, about 20 jihadists escaped from the Old City and popped up a couple of blocks from our TSP. In addition to this, the jihadist snipers have night vision goggles which meant the Iraqi army could only move very slowly.

It's definitely calmed down a bit now, although between about five and seven this morning it was pretty full on.