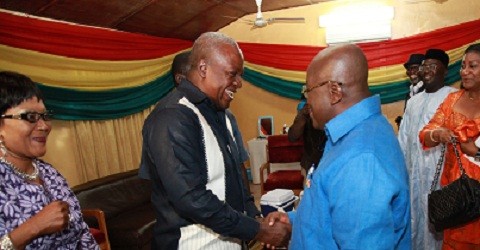 The second and final debate for the presidential candidates of the four political parties with representation in Parliament comes off at the Banquet Hall of the State House in Accra tonight.

The first presidential debate of the IEA was held in Tamale on Tuesday, October 30, 2012.

At tonight’s programme, the presidential candidates will answer questions on thematic areas such as good governance (peace and security, corruption, bureaucracy, the rule of law, as well as character and leadership), natural resource management (oil and gas, mining, forestry and environmental management) and women and gender issues.

Other thematic areas on which the presidential candidates are required to answer questions are the youth, children, and persons with disability, sports, as well as culture and arts.

The debate, which is part of the IEA’s efforts at consolidating multiparty democracy and promoting issue-based elections, will afford the candidates the opportunity to respond to questions on various aspects of the country’s national development process.

The debate is expected to provide another opportunity for the electorate to make informed choices on December 7,2012.

Following the balloting for positions conducted by the political parties, President Mahama will take the first seat, followed by Dr Sakara, Mr Ayariga and Nana Akufo-Addo in that order.

The programme will be broadcast live on Multi TV’s Joy News, Joy FM and will also be streamed live on Myjoyonline.com

Political scientists have described today’s event as a fine opportunity for candidates who did not perform well in the October 30 debate to make up for their poor performance.

It will bring to three the number of debates organised by the IEA ahead of the December 7 elections.

After the first debate on October 30, the institute organised another one for the running mates of the presidential candidates of the NDC, the CPP, the PNC and the NPP.

The programme for the running mates, which was held in Takoradi in the Western Region on November 6, featured Paa Kwesi Amissah-Arthur of the NDC, Akosua Frimpomaa Sarpong-Kumankuma of the CPP, Mrs Helen Matrevi of the PNC and Dr Mahamudu Bawumia of the NPP.