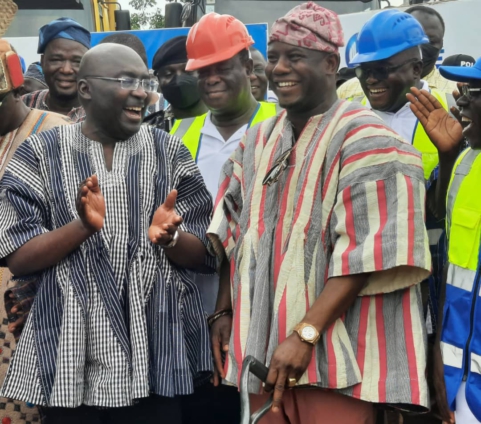 The Vice President, Dr. Mahamudu Bawumia has cut sod for the commencement of work on the Tamale-Yendi-Tatale road which forms part of the Eastern Corridor roads linking the South through Bimbila.

The 167km Tatale-Yendi-Tamale Road Project is funded at a cost of USD150 million by the World Bank under the Transport Sector Improvement Project.

Speaking at the event, Dr. Bawumia said no government in the history of the 4th Republic has attempted to tar the entire stretch of the road like the New Patriotic Party government is about to do.

He said this is further evidence that the Year of Roads declared by President Akufo-Addo is firmly on course.

Dr. Bawumia said the Tatale-Yendi-Tamale road project is expected to be completed in two years, but the contractors will be undertaking maintenance works for five more years, bringing the total project time to seven years.

He said in addition to the construction of the 167km highway between Tatale and Tamale in the Northern Region, 670km and 240 km feeder roads will be rehabilitated in the Upper West and Bono East Regions.

Dr. Bawumia noted that under the Transport Sector Improvement Project, a total of 1,077km of roads will be rehabilitated within the next two years.

“The Trunk Road component will be paved, whilst the feeder roads will be mainly gravel finish. Good road networks are essential in linking producers to markets, workers to jobs, students to school, and the sick to hospitals. Undoubtedly, roads are vital to any development plan,” the Vice President said.

He urged the contractors to engage local labour within the catchment area for the works while urging them to be mindful of the environmental protection laws of this country and institute measures to reduce the negative impact of the project on the health and safety of our people.

The Minister for Roads and Highways, Kwesi Amoako-Atta who gave a breakdown of what the project entails, said upgrading works of 165.02 km of roads would be done including, but not limited to, the installation of street lights, sidewalks, bus bays and stopping lanes within urban areas.

He said a 380 km of road at the Tatale Border post would be upgraded, an improvement of the Kumfong Road in Yendi as part of a one-way couple with R201 (2.6 km), rehabilitation of one existing bridge and improvement of eight bridges among others.

The Roads Minister appealed to motorists and residents along the project roads to cooperate with the contractors during the construction period.