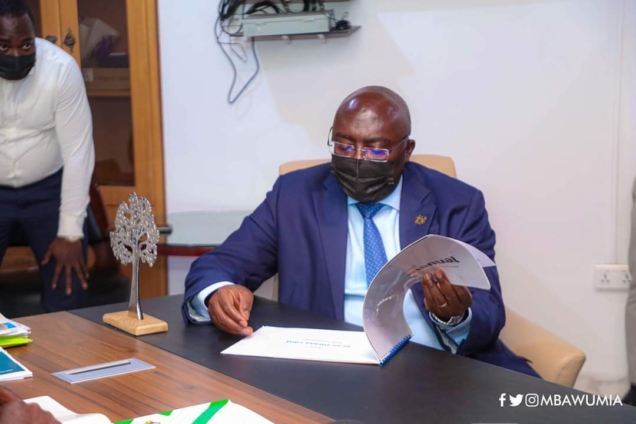 The Vice President, Dr. Mahamudu Bawumia has encouraged institutions in the public sector to incorporate digital technology into their operations.

On Monday, January 31, the Vice President made the call while lauding the leadership of the National Service Scheme (NSS) for tapping into the digitalisation agenda and saving the country an amount of GH¢112million.

“The use of technology in just one institution has saved us GH¢112m. Imagine how much would be saved if 10 institutions, or the entire public sector, infused digitalization in their operations, especially in the verification of workers before the payment of compensation,” Dr. Bawumia said.

According to the Executive Director of NSS, Osei Assibey Antwi, through the use of technology, his outfit blocked the enrolment of 14,027 potential fraudsters onto the Scheme, thus saving government from paying allowances to ghost names.

He said the NSS achieved this due to the introduction of the Metric App, which combines facial recognition technology and Identity Card checks for verification and validation.

“We had them on lists as potential Service Personnel but they run away and couldn’t register because the system raised red flags and weeded them out, so they couldn’t register. Without this use of technology we would have paid GH¢94million, and if they had gone to the private sector, GH¢112million.

All of that money would have gone down the drain to ‘ghosts’. Digitalization of our operations, started by my predecessor and continued since I came into office, has indeed saved Ghana a lot of money,” he emphasized.

In response, Dr. Mahamudu Bawumia, who paid a working visit to the NSS, encouraged the managers of the Scheme to keep up the good work.

“I am hearing exciting things about your operations. Keep it up. You are doing a good job.”

According to him, government would save a colossal amount of money if such initiatives are implemented across institutions in the public sector.

DISCLAIMER: The Views, Comments, Opinions, Contributions and Statements made by Readers and Contributors on this platform do not necessarily represent the views or policy of Multimedia Group Limited.
Tags:
Digitalisation
Dr Mahamudu Bawumia
Vice President