Bawumia is a potential 2016 candidate for NPP – Alfred Ogbamey 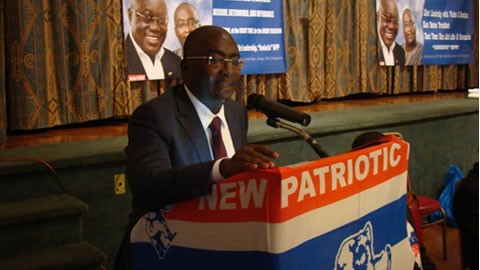 The Managing Editor of Gye Nyame Concord newspaper, claims the New Patriotic Party’s decision to make its vice presidential candidate in the 2012 election, Dr. Mahamudu Bawumia the key witness in its Election Petition is part of a strategy to make him candidate for the 2016 elections.

According to Alfred Ogbamey, Dr.Bawumia is gaining more mileage in the NPP as the one defending the party when it mattered most.

He was commenting on Dr. Bawumia’s performance as witness for the petitioners in the ongoing election petition hearing at the Supreme Court.

Counsel for the respondents have been taking Dr. Bawumia through rigorous cross-examination in order to discredit the evidence he has presented in court, but there’s the perception that he has performed creditably.

He said even though the NPP’s 2012 presidential candidate, Nana Akufo-Addo and Chairman Jake Obetsebi Lamptey are petitioners, they did not elect themselves to be in the witness box to defend the party.

Alfred Ogbamey was of the view that many NPP members are beginning to accept the fact that Dr. Bawumia is the best alternative in the event it lost the case.

The Gye Nyame Concord Editor observed that the party’s resolve to market Dr. Bawumia through the case is yielding the needed results because he [Bawumia] has proven to be up to the task.

Alfred Ogbamey said Dr. Bawumia has won the hearts of many and thus should he contest in the NPP’s National Delegate Congress, he will win massively.