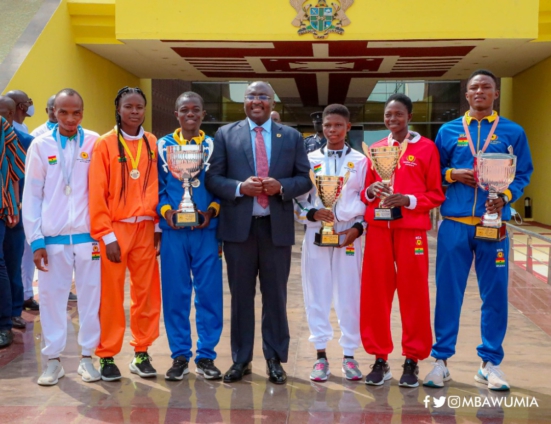 The cross-country event which had been abandoned for over a decade, was revived it in 2017 by the National Sports Authority (NSA).

The latest edition was held in Akyem Oda in the Eastern Region last week.

To underline the significance of the event to the government, towards its commitment to the promotion of sports, winners of the cross country competition from various regions were accorded a grand reception at the seat of government by Vice President Bawumia for their medal presentation.

Dr Bawumia congratulated the athletes for their exploits, as well as the NSA for reviving the competition.

“This event, the cross country, is an event which had been abandoned for 10 years. And like anything, when you don’t pay attention to it, it will deteriorate,” Dr. Bawumia said.

“I am very happy that having abandoned this for ten years, we have revived it from 2017 and we are seeing some good results and today is the day for these wonderful athletes and their coaches, who have worked very hard because you have to train, you don’t just win.

“So we acknowledge you our dear athletes and coaches for your excellent performance.”

Dr Bawumia, who described himself as an “enthusiastic sports person”, highlighted the enormous benefits of sports, and its significant contribution to the development of nations across the world.

He called for greater investment and support for more sports disciplines in the country aside football, in order to create more opportunities for young people.

“The benefits of sports is so underestimated and over the years, governments have not really paid the requisite attention to sports,” he noted.

“Maybe, we tend to focus a lot on football but there are many other sports. When you look at many countries around the world, you’ll see for example, the sort of jobs that the sports industry creates is just massive.

“Incomes that are generated across the sports industry is just massive so it is very important that as a country, we pay attention to sports, invest in sports and we nurture sports so that we can have the benefits for this country,” he stated.