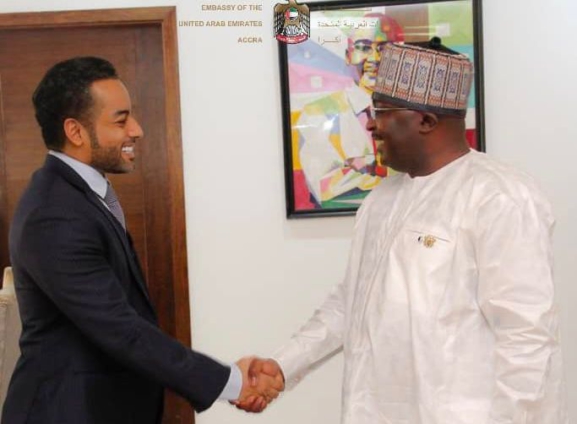 Vice President, Dr. Alhaji Mahamudu Bawumia, has received a special invitation to participate in the 8th World Government Summit to be held in Dubai, in the United Arab Emirates (UAE).

This is after the Vice President welcomed to the seat of government, Jubilee House, Chargé D’Affaires of the United Arab Emirates Embassy in Accra, Mr. Amer Al Alawi.

Dr. Bawumia in brief remarks welcoming Mr. Al-Alawi, noted the existence of the good relations between Ghana and the United Arab Emirates, over the years.

The Vice President said President Akufo-Addo’s planned visit to the UAE as part of the Expo Dubai 2020 is a highlight of the good relations between the two nations and was hopeful of more.

Mr. Amer Al Alawi on his part noted the growth in relations between the two nations over the years and delivered an official invitation to the upcoming 8th World Government Summit in Dubai to the Vice President, Dr. Bawumia.

The Vice President expressed appreciation for the honour and recalled his participation in the 5th Edition of the Summit.

In February 2017, Dr. Bawumia was a panel speaker along with specially selected African leaders.

Dr. Bawumia spoke on the topic ‘Leapfrogging Developments: The African Story’ where he highlighted the measures adopted by many African nations to boost development using homegrown technology and implemented in full.

The 8th edition of the World Government Summit will be held exceptionally in tandem with the closing of “Expo 2020 Dubai”, the largest event of its kind under the theme “Shaping the Future of Governments”.

The summit will bring thought leaders, global experts and decision makers from around the globe to share and contribute to the development of tools, policies, and models that are essential in shaping future governments.