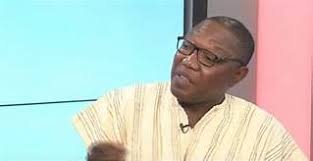 MP for Builsa South Dr Clement Apaak has described Vice President Mahamudu Bawumia’s intervention in the passage of the Public Universities Bill as a charade.

The Builsa South MP has explained that the move is an attempt to redeem the Veep’s image and to “let him seem distant from the challenges the current government has had with the academic fraternity.”

This comes after processes to approve the Public Universities Bill was halted following a meeting held by Vice President Dr Mahamudu Bawumia with the leadership of UTAG and other ranking members of Parliament.

However, Dr Apaak has alleged that the intervention “is a ploy to promote the Akufo-Addo preferred Dr. Bawumia and Mathew Opoku ticket for 2024.”

He further noted that Dr Bawumia had knowledge of the processes involved in the passage of the Bill before its recent appearance in parliament for approval.

“Didn’t Bawumia know that the withdrawal of the Bill was to allow further stakeholder consultations, which didn’t happen? And as that didn’t take place, what sanctions have been meted out to the Minister for Education who failed to or refused to do directed?

“Are we to believe that the Akufo-Addo government, his Minister for Education, and the Chairman of the Education Committee have acted on the Bill; withdrawing and relaying it without the knowledge of Akufo-Addo and Dr. Bawumia?” he said.

He has, therefore, urged the public to disregard the move by the Vice President.

“So don’t be deceived, Bawumia’s so-called intervention is insincere, it’s to let him look innocent and to seem distant from the challenges the current government, which he and Mathew Opoku Prempeh are key members of, has had with the academic fraternity.

“More specifically, Bawumia’s so-called intervention is to cleanse the ‘sins’ his intended 2024 running mate has committed against the academic community.

“NPP members in opposing camps are not comfortable with the duo hence schemes such as this should be expected in these last few days of the current government,” he added.