BBC and Sky to show Africa Cup of Nations games 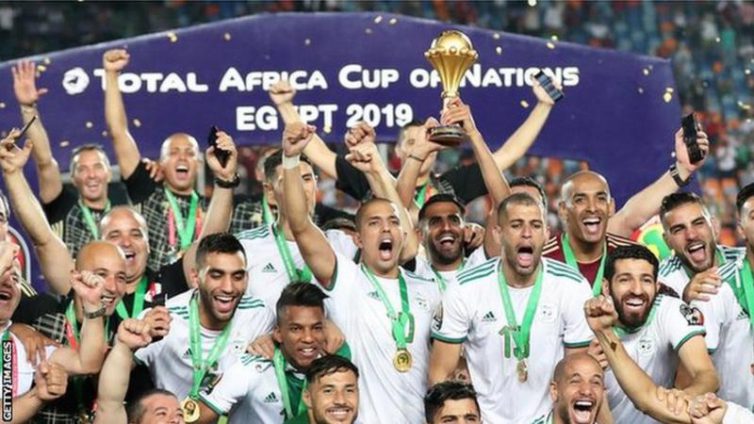 The Africa Cup of Nations final will be one of 10 matches in the tournament shown live on the BBC.

Two quarter-finals and both semi-finals will also be on the BBC, which also has digital clips as part of the deal.

Sky is showing all 52 games in the event, which will be played in Cameroon between 9 January and 6 February.

“We’re thrilled to be bringing such a prestigious event free-to-air for UK audiences,” Barbara Slater, director of BBC Sport said.

“The African Cup of Nations launches a huge year of international football and I know fans will look forward to following all the action from the competition across BBC platforms.”

Holders Algeria have drawn former winners Ivory Coast in the group stage of the delayed 2021 Africa Cup of Nations.

Africa’s football showpiece, usually held every two years, was scheduled to be played last year but was postponed because of the global coronavirus pandemic.

The Confederation of African Football (Caf) said securing the UK and Ireland deal with the BBC and Sky as it was important for the Cup of Nations – which is the single-biggest sporting event on African soil – to be “accessible all over the world”.

“This event is consumed not only by Africans but enjoys a global audience,” Veron Mosengo-Omba, Caf general secretary, said.

“In Cameroon next year, we are planning an event bigger and better, that will attract millions of viewers. We are excited to see Sky and the BBC on board.”

Last week, Caf dismissed rumours the tournament could be moved from Cameroon following the recent discovery of the new Omicron variant of Covid-19.

More reports on Wednesday suggested the event was under threat, leading to Lux September – a Caf communications official – dismissing those suggestions as “lies”.

DISCLAIMER: The Views, Comments, Opinions, Contributions and Statements made by Readers and Contributors on this platform do not necessarily represent the views or policy of Multimedia Group Limited.
Tags:
Africa Cup of Nations
BBC
Sky