Berlin Brandenburg: The airport with half a million faults - MyJoyOnline.com

Berlin Brandenburg: The airport with half a million faults 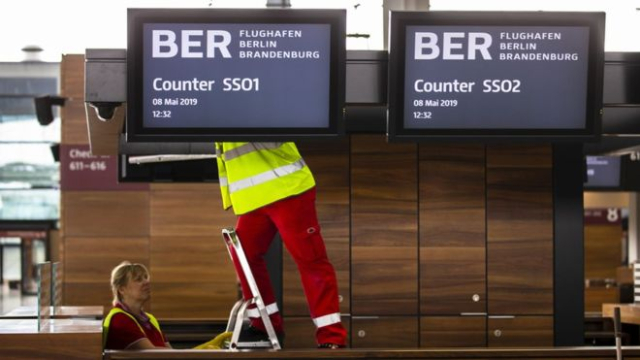 The sweeping approach along a slick set of motorway junctions is convincing enough – although there is curiously little traffic.

Then, the main terminal building comes into view – its statement entrance with huge expanses of glass and exits from a large railway station below emerging into a piazza in front. To one side stands a smart hotel.

As a structure, it looks impressive enough.

Until you pause, look around you, and absorb the silence. This is Berlin Brandenburg or BER, the new, state-of-the-art international airport built to mark reunified Germany’s re-emergence as a global destination.

It is a bold new structure, costing billions, and was supposed to be completed in 2012.

But it has never opened.

BER has become for Germany not a new source of pride but a symbol of engineering catastrophe. It’s what top global infrastructure expert Bent Flyvbjerg calls a “national trauma” and an ideal way “to learn how not to do things”. 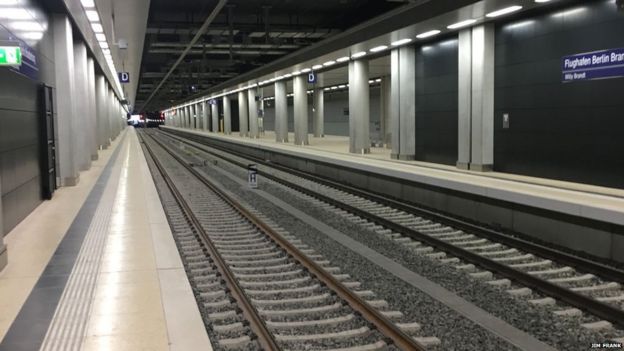 No passengers have ever emerged from the railway station, which is currently running only one “ghost train” a day, to keep the air moving.

No-one has stayed at the smart airport hotel, which has a skeleton staff forlornly dusting rooms and turning on taps to keep the water supply moving.

Enter the grand terminal building itself and the spooky atmosphere intensifies.

Huge luggage carousels are being given their daily rotation to stop them from seizing up.

There are several of them, designed to process constant arrivals.

Round and round they go, smooth – but pointless. They have never processed a single piece of real luggage.

Indicator boards show flights arriving and departing. But they are using data from other airports, elsewhere in Berlin.

Some of the boards tested since the airport was supposed to have opened have now had to be replaced, worn out without ever having shown a flight landing or taking off from here.

The company running the airport promises it will finally open next year, which would make it at least eight years late as well as billions over budget.

So what on Earth has happened in Germany, meant to be one of the world’s leaders in efficiency and engineering? 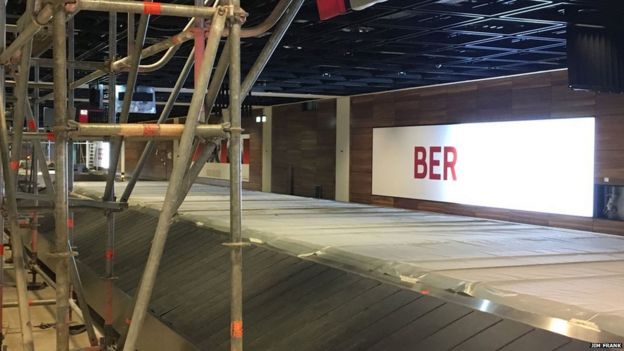 This is the story of how a noble ambition to transcend a troubled past was slowly suffocated by political wrangling, bungling incompetence, and the world’s worst tangle of badly installed cabling.

The story has its roots in the long years of Berlin’s Cold War isolation. Divided by a concrete wall, marooned behind the Iron Curtain, its links with the wider world were sharply restricted by tensions between the Soviet Union and Western Allies.

For West Berliners, air links to the West, which had kept their part of the city free from Soviet domination during the Berlin Airlift in the late 1940s, were something precious but precarious, highly limited and expensive.

When I lived in West Berlin the 1980s, I came and went by train.

For East Berliners, imprisoned by their Communist government behind the wall, the idea of flying West or around the globe was nothing more than wild fantasy.

Then, US President Ronald Reagan came to West Berlin in 1987. His headline sound bite was to call on then Soviet leader Mikhail Gorbachev to “tear down this wall”.

Much less noticed by the outside world was Reagan’s promise, later in the speech, of a new aviation future.

“We look to the day,” he said, “when West Berlin can become one of the chief aviation hubs in all Central Europe.” 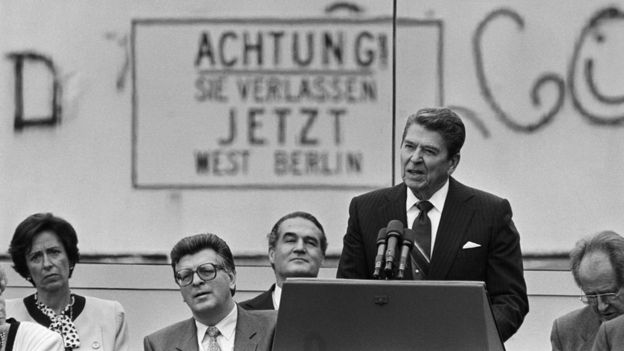 It was a dream all Berliners could share. And after the wall did come down, in 1989, one of the first political priorities was new infrastructure – to bind Berlin together again, celebrate its status as the capital of a reunified country, and make it a new global destination.

And a lot of highly impressive things were built. From a giant hole in the ground near where the wall had stood emerged a towering new central railway station, linking the city and the rest of Germany and beyond in every direction.

When it came to air travel, most politicians agreed the city’s existing airports – Tempelhof and Tegel in the west of the city, and Schoenefeld, in what had been the Communist East – urgently needed replacing. So, they set up a company to build an ambitious new airport. 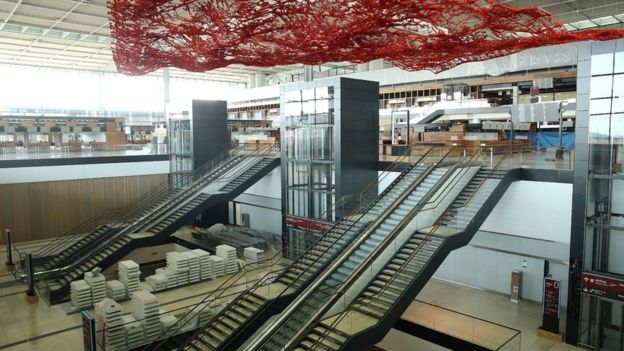 “The supervisory board was full of politicians who had no idea how to supervise the project,” says Prof Genia Kostka, of the Free University of Berlin. “They were in charge of key decisions.”

When the global financial crisis in 2007-08 made it harder to attract a large specialist contractor to build and fund the airport, the politicians ploughed on, using public money.

Martin Delius, a former Berlin city politician who later headed an extensive inquiry into what went wrong, says those in charge decided “to give 30 to 40 contracts to smaller companies which they thought they could pressurise into giving them lower prices”.

“They built a very complex controlling system which didn’t work,” he says.

Most disruptive of all were decisions to change the size and content of the new airport – while it was being built.

As he shows me around the interior of the new but unused airport, Michael Dorn from the company running it, FBB, says the capacity inside the terminal building was doubled – after construction began.

Joel Dullroy, a Berlin-based journalist with Radio Spaetkauf, who produced a podcast telling this airport’s story, says Mr Gerkan wrote disdainfully about passengers “dragging around unwanted bottles of whisky like a beggar” and wanted to have as few airport shops as possible.

But when the airport company realised this – very late in the day – it insisted on adding whole new floors of shopping into the design, as the company now makes up to 50% of its revenue from retail. 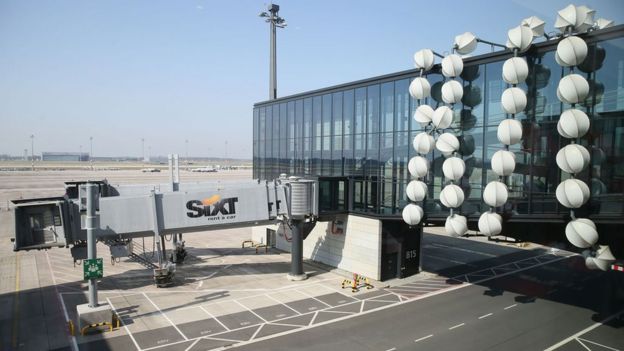 Extra capacity for things such as sprinklers and smoke extraction had to be crammed in, no-one knew any more what exactly had been installed where. It was, says Prof Genia Kostka, of Berlin’s Hertie School of Governance, “like fixing an aeroplane while it’s flying”.

The constructors were also racing to keep up with a low-cost revolution in the airline industry. At first, Dullroy says, “they didn’t have any gates intended for low-cost flights”, only the much more expensive “jet bridges”.

However, the politicians supervising the airport – especially Berlin’s then-mayor, the extrovert Klaus Wowereit – hated the idea of scaling things down. They insisted new departure gates were added to accommodate giant Airbus A380 aircraft, whose production has ended before the airport can open.

But as low-cost carriers became increasingly influential, the airport had to add new sections to accommodate them.

All these changes added to chaotic supervision meant the airport builders simply lost control of what was being done, especially the hugely complicated technical infrastructure.

After a first postponement, the airport was set for a grand opening in 2012. Many involved in the construction had begun to warn of fundamental problems. But the politicians in charge, fixated on their dreams of a glamorous party announcing Berlin’s new connection to the world, ignored the bad news. 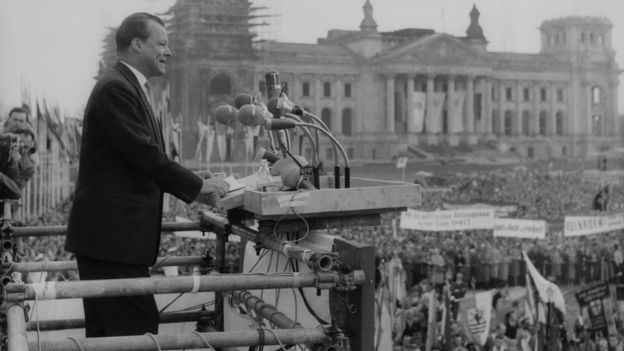 After invitations to an opening ceremony with Chancellor Angela Merkel in attendance had been sent out, the local official responsible for certifying the building’s fire safety called a halt. He had discovered that a supposedly sophisticated system of detectors and automated alarmed fire doors was not functioning.

Those running the building had instead been working with makeshift systems, which included temporary employees sitting by doors to raise the alarm with mobile phones.

Mayor Wowereit and colleagues from local, regional and federal government had to announce, in a humiliating press conference, the grand opening could not take place.

Suddenly, the astonishing scale of the new airport’s problems emerged.

New construction boss Hartmut Mehdorn made a list of all the faults and failures, Mr Delius tells me.

“Small ones like the wrong light bulbs to big ones like all the cables are wrong,” he says.

What you might call chaotic cabling has been the curse of this project – and it’s still dangling over the whole enterprise.

They have had to put in “many hundreds of kilometres of new cables”, Mr Dorn says, to replace what was originally installed. 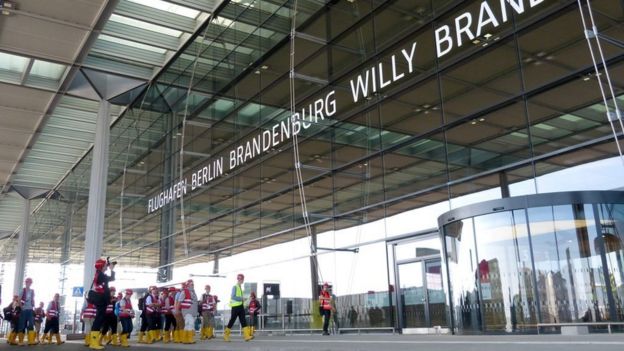 And costs have gone up all the time, with millions spent each month maintaining the building.

There were some who believed – as the scale of the problems emerged – that it would be best to abandon the new airport altogether and start again from scratch.

Mr Delius was one. But he has changed his mind. “There’s a point of no return,” he says. “It’s public money. If you spend it, you need to get something out of it.”

So, the airport of no arrivals has, in financial terms, passed the point of no return.

The management company now says the overall cost of the project will be 6bn euros (£5.3bn) – if it opens as planned next year – up from an original projection of about 2bn euros. 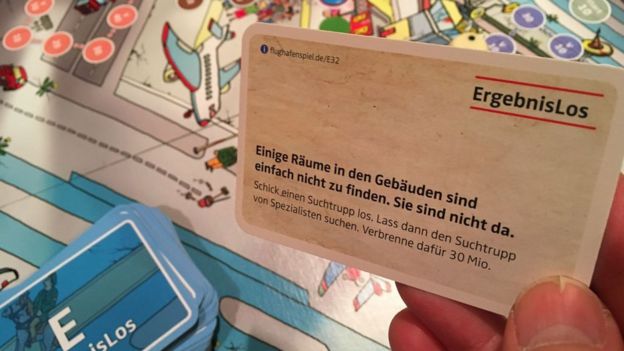 The final sum will be paid mostly by German taxpayers, who have come to view the whole saga with emotions ranging from rage to boredom to very black humour

And some have even turned this black humour into a business opportunity. Philipp Messinger and Bastian Ignaszewski have invented a board game based on the Berlin airport disaster. The main object of the game is to waste as much public money as possible.

I pick up a card saying some of the escalators from the train station were built too short, needing very expensive additions. “Everything on these cards,” Mr Messinger says, “has really happened.”

Intense attempts are now being made, Mr Dorn says, to ensure all the official permissions are obtained before the planned opening, in October 2020.

And he is hoping if it does finally open, its traumatic history will swiftly fade from memory.