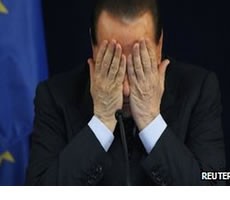 The Italian Senate has voted to expel ex-Prime Minister Silvio Berlusconi from parliament with immediate effect over his conviction for tax fraud.

Berlusconi, who has dominated politics for 20 years, could now face arrest over other criminal cases as he has lost his immunity from prosecution.

He told supporters in Rome it was a "day of mourning" for democracy.

Ahead of the vote, he vowed to remain in politics to lead his Forza Italia in a "fight for the good of Italy".

A defiant Berlusconi told supporters gathered outside his Rome residence that "no political leader has suffered a persecution such as I have lived through".

Berlusconi, 77, said his struggle would continue outside parliament.

He said: "We must stay on the field, we must not despair if the leader of the centre-right is not a senator any more. There are leaders of other parties who are not parliamentarians."

The vote marks the end of a process which determines that Berlusconi cannot take part in any general election for six years.

The BBC's Alan Johnston in Rome says that Berlusconi has been flung out of parliament in the most humiliating of circumstances – effectively told that as a convicted felon he is no longer fit for public office.

Our correspondent says that, while there is no question this is a major blow to the former PM's political ambitions, the Berlusconi show is far from over – he will continue to lead Forza Italia outside parliament, a party that has considerable electoral support.

The debate in the Senate had been heated, with two rival senators nearly coming to blows.

Manuela Ripetti of Berlusconi's Forza Italia party shouted: "Your only aim is to eliminate Silvio Berlusconi!"

No formal vote was held, but senators rejected a series of challenges from Berlusconi's supporters.

The Senate speaker then declared the three-time prime minister ineligible for a seat.

"The conclusions of the committee on elections have been approved, abolishing the election of senator Silvio Berlusconi," Speaker Pietro Grasso said.

After the vote, Beppe Grillo, the leader of the anti-establishment 5-Star Movement, tweeted: "Berlusconi has been expelled by the Senate. One is out. Now we must evict all the others from the House."

Berlusconi was convicted of tax fraud in October 2012 over deals his firm Mediaset made to purchase TV rights to US films. The verdict was upheld in August.

He will have to serve a one-year sentence, probably under house arrest or by doing community service because of his age.

He has also been convicted of paying for sex with an underage prostitute and of a breach of confidentiality over a police wiretap. He is appealing against both convictions.

Earlier this year, Berlusconi tried to topple the coalition government of Enrico Letta.

However, a group of Forza Italia dissidents led by Angelino Alfano broke away and Berlusconi backed down during a confidence vote when it was clear he would not get the support he needed.

"It is an ugly day for parliament and for Italy. Parliament has expelled a man millions had voted for," Mr Alfano said.

Berlusconi had formally withdrawn Forza Italia from Mr Letta's coalition on Tuesday, but the administration won another vote of confidence and passed the budget.