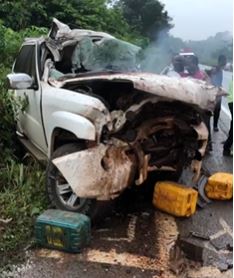 The Municipal Chief Executive (MCE) for Bibiani-Anhwiaso-Bekwai in the Western North Region, Alfred Amoah has reportedly been involved in an accident on the Accra-Kumasi highway.

Sources say the accident, which involved multiple vehicles, occurred when a trailer truck with registration number AS 4229-X lost control around Apedwa and crashed into his vehicle.

While the trailer was said to be traveling from Kumasi towards Accra, the MCE and his driver were moving from Accra to Kumasi.

According to eyewitnesses, the vehicle, with registration number GN 2060-18 was damaged beyond recognition; trapping the occupants within.

The victims were taken to the Kibi Government Hospital for treatment.

Meanwhile personnel from the Ghana Police Service have already reported to the scene to ensure calm and order.