Biden calls for unity: It is time “to come together as a nation” 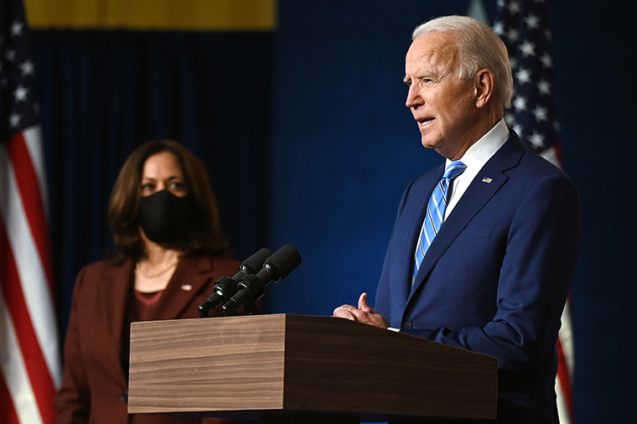 Democratic Presidential candidate Joe Biden, flanked by US Democratic vice presidential nominee and Senator from California, Kamala Harris (L), speaks at the Chase Center in Wilmington, Delaware, on November 4, 2020. - President Donald Trump and Democratic challenger Joe Biden are squaring off for what could be a legal battle for the White House, running neck-and-neck in the electoral vote count, and several battleground states still in play on November 4. (Photo by JIM WATSON / AFP) (Photo by JIM WATSON/AFP via Getty Images)

As Joe Biden gets closer to the 270 electoral votes to win the presidential election, he talked about how he would be a leader for everyone – not just the people who voted for him – in an address calling for unity and bipartisanship on Wednesday.

“We are campaigning as Democrats, but I will govern as an American president,” Biden said.

“The presidency, itself, is not a partisan institution. It’s the one office in this nation that represents everyone and it demands a duty of care for all Americans and that is precisely what I will do.”

He talked about the anxiety and division that many Americans feel, saying that although there are opposing views across the country “we have to stop treating our opponents as enemies.”

“We are not enemies. What brings us together as Americans are so much stronger than anything that can tear us apart,” Biden said.

“It’s time for us to do what we have always done as Americans – to put the harsh rhetoric of the campaign behind us, to lower the temperature, to see each other again, to listen to one another, to hear each other again and respect and care for one another. To unite, to heal, to come together as a nation,” he added.