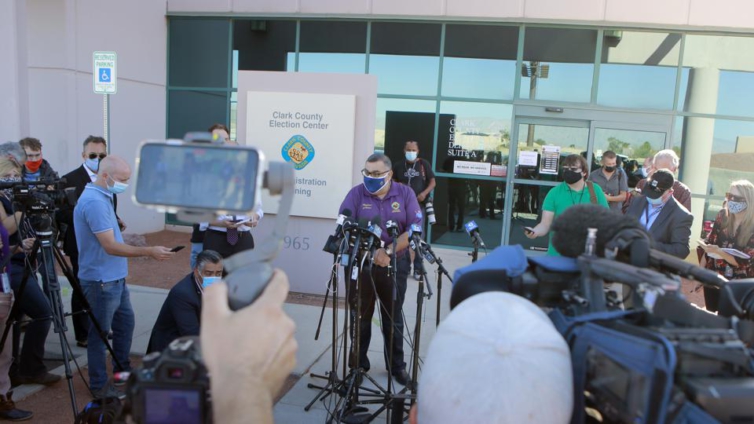 Former Vice President Joe Biden’s lead in Nevada nearly doubled on Thursday as more outstanding votes were reported, with the Biden campaign predicting victory in the state as the Trump campaign attempts to invalidate thousands of votes there.

Biden campaign manager Jen O’Malley Dillon predicted in a briefing that there would be a “bounce” in the Nevada results on Thursday when in-person and rural votes, which are expected to skew towards Trump, are reported in the afternoon.

However, the campaign predicted that vote totals reported later in the evening would heavily favor former Vice President Biden and that, ultimately, they remain “on track to win.”

Just under 12,000 votes is all that separates Trump and Biden in the state – which cast more than 1.1 million votes – though that margin represents an increase from around 7,000 thanks to a new trove of ballots reported early Thursday afternoon.

Perhaps signaling a pessimistic view of their chances in the state, the Trump campaign filed a lawsuit in Nevada on Thursday contending that 10,000 votes in the state were cast by former residents.

The suit comes after Trump campaign manager Bill Stepien predicted Wednesday it would ultimately overtake Biden in the state and prevail by 5,500 votes, a prediction that was not reiterated during a press call on Thursday.

“We are absolutely confident that Joe Biden will be the next President of the United States,” O’Malley Dillon told reporters.

270. That’s the number of electoral votes Biden would have if he secured Nevada after the Associated Press called Arizona, Michigan and Wisconsin for him.

Outstanding votes are still being counted in several potentially pivotal states, including Georgia and Pennsylvania, where Biden is rapidly closing Trump’s lead thanks to mail-in ballots skewing heavily in his favor.

Arizona, however, has seen Biden’s lead dwindle, but the Biden campaign predicted that, like in Nevada, it would tighten before Biden eventually comes out on top.

DISCLAIMER: The Views, Comments, Opinions, Contributions and Statements made by Readers and Contributors on this platform do not necessarily represent the views or policy of Multimedia Group Limited.
Tags:
Joe Biden
Nevada
US elections 2020