Biden team is mounting a push to get supporters and allies to validate election legitimacy - MyJoyOnline.com 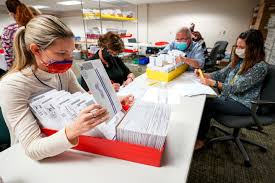 Joe Biden is waking up today on the cusp of realizing a quest he started more than three decades ago: Winning the presidency.

But it also comes with a stark reality. If he wins, he will have to fight for the legitimacy of his own victory.

Even as the votes are still being counted in Pennsylvania, his native commonwealth that could put him over the top, his advisers have mounted an aggressive behind-the-scenes push to get his supporters – and, even more importantly, Republicans to help validate the sanctity of the election.

The Biden campaign took note of President Trump’s dire tone in the White House last night and began a plan that is underway today to get his old allies in the Senate – and others from a lifetime in public life – to speak to the legitimacy of the election.

In Wilmington, Delaware, with the sun already rising in the morning sky, the stage is still waiting for Biden. He will address the country at some point, but aides said the timing is out of their hands.