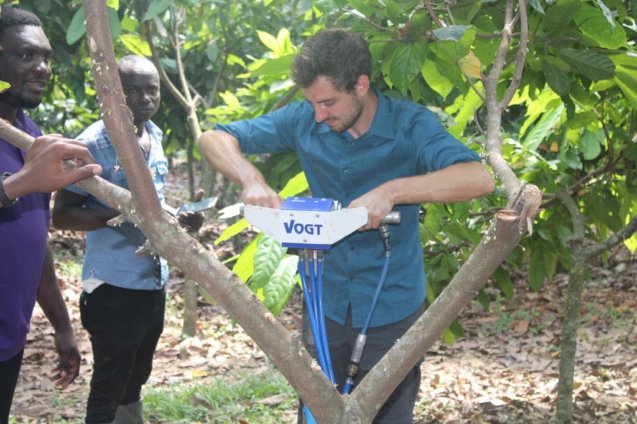 Soil is the most significant source of various nutrients and microflora but due to its depletion by excessive addition of chemical fertilizers, a rehabilitated attention is needed to maintain sustainable approaches in agricultural crop production.

Researchers are recommending the use of biochar as a carbon-rich solid material to help restore soil nutrients and combat climate change.

They say crop growth and yield can be increased using biochar.

Ithaka Institute is therefore conducting scientific research about biochar in cocoa production, as it has high potential for under-utilized biochar feedstock.

The research which is currently ongoing at Bechem in Ahafo, Asanko in Western and Agona Juaben in the Ashanti regions, is expected to alleviate nutrient stress and sustainably intensify system productivity.

Mr. Drewer says piloting this new technology comes with some challenges that need to be addressed citing the mode of application as an example.

The technology is free for now and farmers are trained and motivated to produce the biochar for their farms.

The project has certified 18 beneficiary farmers who produced and applied biochar to their cocoa farms.

This is the first certified biochar-based carbon sink in smallholder agriculture/cocoa systems.

It is verified according to the European biochar certificate, as developed by the Ithaka institute.

This enables beneficiaries to receive carbon premium on their produce.

“We trained 33 farmers, and we have applied biochar to 18 farmers. These 18 farmers are biochar based carbon sink certified,” Country Lead Consultant of Ithaka Institute, Aikins Nyamekye.

Biochar is a high carbon organic matter, a by-product derived from biomass through high-temperature and low-oxygen pyrolysis.

It is black, highly porous, and finely grained, with light weight, large surface area and pH, all of which have a positive effect on its application on the soil.

To address major concern on quality of agricultural soil degradation, biochar is applied to the soil to improve its quality.

It has been considered as an effective method to reclaim contaminated soil and achieve high crop yields without destroying the natural environment.

Global Technical Coordinator indicates that, the overall objective is to explore the positive effects of biochar amendment on cocoa growth, the positive influence of biochar on plant growth and soil quality that suggest, using biochar is a good way to overcome nutrient deficiency.

“In perennial crops it makes sense to use the root zone application method and this was done by using the Geo injection technology for this pilot phase. We also see the topsoil application of biochar slurry as feasible for upscaling and this is also being investigated.”

It is produced during pyrolysis, a thermal decomposition of biomass in an oxygen-limited environment.

“This project seek to use the cocoa husk which already has management challenges. The biochar also has economic and agronomic benefits,” Dr. Issaka Abdulai, Researcher at the University of Gottingen in Germany.

To combat climate change, biochar is added to the soil to sequester carbon because its physical properties support its role as an environmentally management product.

“The project has a high potential for climate change mitigation potential,” that’s according to Mr. Drewer.