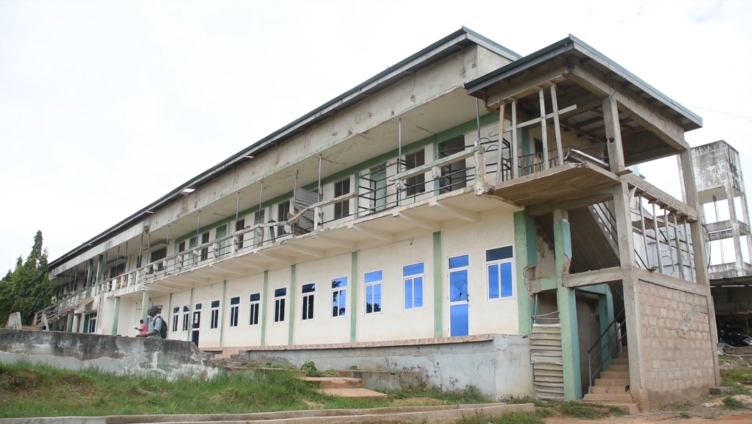 The oldest structure on the Bishop Herman College campus in Kpando in the Volta Region, has developed defects at sections that threaten the existence of the building.

Some columns holding the corridor have fallen off, while others have suffered cracks posing danger to the school community.

The Giant Block, which houses a dormitory, library, and box rooms, is one of the oldest structures on the campus since the school was established in 1952.

The structure which accommodates about 300 of the 2200 student population, is experiencing serious defects.

Some months ago, a storm ripped off sections of the structure’s roofing, forcing the school’s management to evacuate the students in about four dorms.

The development has made old boys of the school worried, since the state of the structure threatens the lives of the students occupying it.

An Old Boy, Komla Wogbe Ofori, explained the contractor abandoned rehabilitation works on the structure due to no payments for previous works done.

According to him, the contractor re-roofed the structure and rehabilitated the stirs at the flanks of the building, which he hadn’t completed.

“The contractor complained that they have not paid him for earlier work done and therefore, he doesn’t have the funds and resources to procure different materials and then come to the site.”

“As it is now, it leaks badly when it rains. Some of the slabs are not safe for occupation. You see, as a public building for young students of this kind, we shouldn’t expose them to weak buildings”, he stressed.

Mr. Ofori called for an immediate intervention from the relevant authorities and indicated the old boys are mobilizing funds to put the building into shape to “restore it [the Giant Block] to its former glory”.

DISCLAIMER: The Views, Comments, Opinions, Contributions and Statements made by Readers and Contributors on this platform do not necessarily represent the views or policy of Multimedia Group Limited.
Tags:
BHOBU
Bishop Herman College
Kpando
Volta Region