A plant has been found to halt the deadly Ebola virus in its tracks in laboratory tests, scientists have said. They used a compound from Garcinia kola (Bitter Kola), a plant commonly eaten in West Africa. Compounds from the plant have also proved effective against some strains of flu.

If the anti-Ebola compound proves successful in animal and human trials, it will be the first medicine to successfully treat the virus that causes Ebola haemorrhagic fever – an often-fatal condition.

The discovery was announced at the 16th International Botanical Congress in St Louis in the US.

Dr Maurice Iwu, who set up and heads the Bioresources Development and Conservation Programme, led the research.

It started 10 years ago when researchers were led to the plant by traditional native healers who have used the plant for the treatment of infectious diseases for centuries.

"This is a very exciting discovery," said Dr Iwu, who himself comes originally from a family of traditional healers.

"The same forest that yields the dreaded Ebola virus could be a source of the cure."

The Nigerian researchers claim they are a step closer to a universally accepted cure for Ebola virus, Dengue fever and leishmaniasis. They claim the herbal preparation has also been successfully used, in clinical studies, to treat hepatitis B and C, cancer, diabetes and tuberculosis.

Amodu is also a member of the committee inaugurated by the Director General of the National Agency for Food Drug Administration and Control (NAFDAC), Dr. Paul Orhii, to champion the development of herbal medicine through scientific validation of all the cure claims.

The yet to be published new study is titled “Natural and Sustainable Alternative for the Management of Dengue Fever in West Africa.”

Also results of another study presented, in 1999, at the 16th International Botanic Congress in St Louis, Missouri, United States, indicate that bitter cola (Garcinia kola), a plant widely used in traditional African medicine may contain a compound that is effective against Ebola virus disease.

Executive director of the Bio-resources Development and Conservation Programme, Prof. Maurice Iwu, explained that an extract derived from the seeds of Garcinia kola could inhibit this virus in cell culture at non-toxic concentrations.

Extracts from Garcinia kola seeds were tested against many complex viral diseases. The active compound, now known to be a biflavonoid, was found to be active against a wide range of viruses including the influenza virus.

“Work was done while a scientist at the Division of Experimental Therapeutics of Walter Reed Army Institute of Research Washington DC in collaboration with Southern Research Institute (SRI).

“But no follow up. Others at Ibadan and other Nigerian universities have done follow-up work on Kolaviron.”

The virus multiplies rapidly in the human body and quickly overwhelms it, and in advanced cases the patient develops high fever and severe bleeding.

The Garcinia kola compound has been shown to halt multiplication of the virus in the laboratory. If repeated in humans, this would give the body a chance to fight off the virus.
The active compound is what is known as a dimeric flavonoid, which is two flavonoid molecules fused together.

Flavonoids are non-toxic and can be found in orange and lemon rinds as well as the colourings of other plants.

The tests are in the early stages still, but the researchers hope that if they continue to prove successful the compound the US Food and Drug Administration will put it on a fast track – making a drug available to humans within a matter of years.

"The discovery of these important properties in a simple compound – flavonoids – was very surprising," said Dr Iwu.
"The structure of this compound lends itself to modification, so it provides a template for future work.

"Even if this particular drug does not succeed through the whole drug approval process, we can use it to construct a new drug for this deadly disease."

The Ebola virus was first documented in 1976 after an outbreak in Zaire, now the Democratic Republic of the Congo – where 88% of the 318 human cases died.

There are four types of the virus – Ebola-Zaire, Ebola-Sudan and Ebola-Ivory Coast all affect humans, while Ebola-Reston has so far only affected monkeys and chimpanzees.

However, doctors have been unable to stop the virus once infection has taken hold – hence the disease has gained a terrifying reputation. 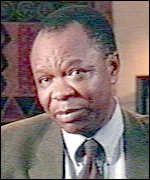 (Pictured above) Dr Maurice Iwu, who set up and heads the Bioresources Development and Conservation Programme.