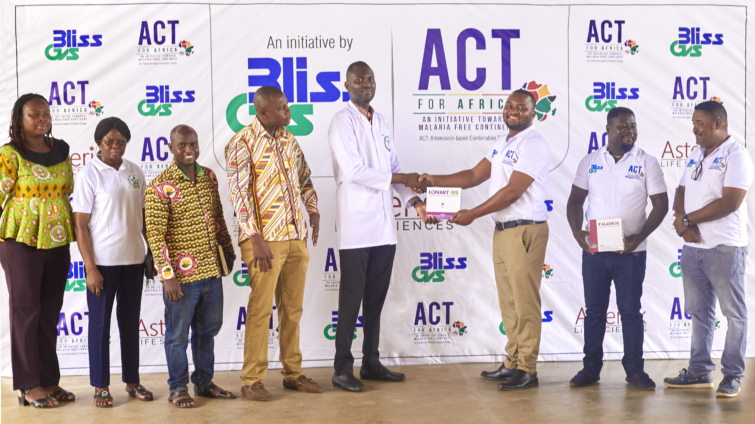 The donation was geared towards the celebration of this year’s World Malaria Day, which will be marked on Monday, April 25.

Bliss GVS Pharma Ghana, in line with their ACT for Africa Campaign, an initiative towards a malaria-free continent, donated drugs worth ¢30,000 to the hospital to help in the fight against malaria.

Presenting the medicines on behalf of the company, the Medical Representative for Bliss GVS Pharma Ghana in Tamale, Seidu Ibrahim Mumuni, reiterated the company’s commitment to the fight against malaria.

“Malaria has been crippling us as a country and also in Africa so we have been leading the initiative to provide certain antimalarial drugs, particularly LONART to combat and eradicate malaria from Ghana and Africa at large”, he said.

Mr Ibrahim Mumuni further explained that the donation is also aimed at creating awareness and empowering healthcare providers to be able to reduce the malaria burden in Ghana and Africa.

He said Bliss GVS Pharma Ghana will continue the donations in some selected regions in the country as it had already begun and added that the team will also engage in community health talks, to educate people on personal hygiene and other preventive measures against malaria.

“We are doing these donations across the nation. Last week we did the first donation at the Koforidua Regional Hospital and we are here at the Tamale Teaching Hospital. We will be going to other parts of the country to do similar donations.

“It is our hope that these donations will go a long way to help the needy access healthcare. The ‘Act for Africa’ campaign is not only about donations. We also include educating the communities around us to create health awareness”, Mr Ibrahim Mumuni said.

Dr. Adam Atiku, receiving the medicines on behalf of the hospital, appreciated the gesture and commended Bliss GVS Pharma Ghana for its instrumental role in the health sector.

Also expressing appreciation for the donation, the Director of Pharmacy for the Tamale Teaching Hospital, Dr. Salifu Alhassan Tiah, disclosed that malaria is among the top ten leading causes of death in the hospital and so such donations would go a long way to help the fight against the disease.

“I believe that this is not going to be the end of it, we will expect that we will keep this relationship into the future so that together we can all combat this monster called malaria”, he said.

Bliss GVS Pharma Ghana also continued its visit to the Nurses and Midwives Training College in Tamale, where the company donated antimalarial drugs and other medicines worth ¢8,000.

Medical Representative for Bliss GVS Pharma Ghana in Tamale, Seidu Ibrahim Mumuni advised the students to visit the hospital and get tested for malaria whenever they show symptoms of malaria.

He discouraged them from self-medicating and described the act as very dangerous.

She also called for future collaborations between the school and Bliss GVS Pharma Ghana towards the common goal of eradicating malaria.