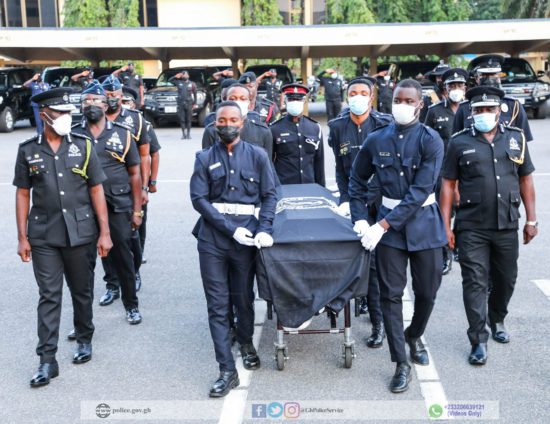 The body of the Police officer who was killed in the Bono Region on Saturday, January 15 has been conveyed to the headquarters in Accra.

The remains of Gen. Sgt. Bright Annobil was received with a parade held in his honour.

The deceased worked at the Berekum Police Station where the sad incident is reported to have happened.

The suspect and an ex-convict, Yaw Peprah had been invited to the police station to assist in an ongoing investigation into a case that Saturday.

According to preliminary investigations, Yaw voluntarily accompanied the late police officer to the Berekum Police Station.

However, on arrival, the suspect is said to have suddenly stabbed the officer “severally on the neck and other parts of the body and escaped.”

The badly wounded Sgt. Annobil died shortly after reaching the Holy Family Hospital where he was rushed.

More drama followed when a search party was constituted to fish out the notorious suspect that same day.

Sunday’s parade had officers from the administration’s rank and file including Inspector-General of Police, Dr. George Akuffo Dampare, members of the Police Management and Advisory Board (POMAB), among others.

The family of the late Sgt. Bright Annobil were also present.

The body was, subsequently, conveyed under Police escort to Transitions Funeral Home for preservation.

A statement from the Police on Monday says they are “working with the bereaved family to give the officer a befitting burial.”