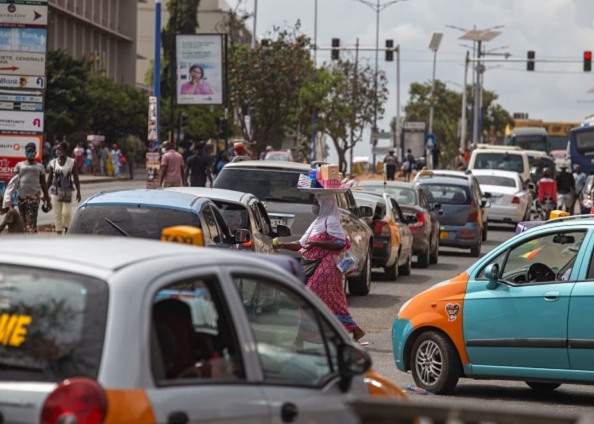 Ghana will be hit by rising fuel as well as food prices as a result of the war in Ukraine. Photo by Nipah Dennis / AFP via Getty Images

The central bank announced its biggest ever interest rate hike on Monday as it seeks to slow rampant inflation that threatens to create a debt crisis in one of West Africa’s largest economies.

The Bank of Ghana (BoG) raised its main lending rate by 250 basis points to 17%, signalling an aggressive stance against the rocketing price of goods from flour to sugar to fuel, and against a depreciating local currency that has dented investor confidence.

“The uncertainty surrounding price development and its impact on economic activity is weighing down business and consumer confidence,” the bank’s governor, Ernest Addison, told a news conference. “The risks to inflation are on the upside.”

Ghana was long seen as a rising star among Africa’s emerging market economies, but underwhelming oil revenues and supply chain disruptions amid the Covid-19 pandemic have dampened expectations.

Restaurants and bakeries have downsized menus and laid off staff. The national taxi drivers union has threatened to strike over spiralling fuel costs.

The war in Ukraine will likely make things worse. Ghana imports nearly a quarter of its wheat from Russia and around 60% of its iron ore from Ukraine, Addison said, though he expects inflation to return to its targeted band of 8% plus-or-minus 2% by the end of the year.

Meanwhile, Ghana’s cedi has weakened by about 20% against the dollar this year, making it the second-weakest currency after the Russian rouble in a list of some 20 emerging market units tracked by Reuters.

Addison blamed that in part on recent downgrades by credit ratings agencies Moody’s and Fitch, which he said shook investor confidence.

The central bank has made efforts to improve the situation. Monday’s rate hike marks the first time it has increased the prime rate twice within one year since 2015, after a previous one in November.

Economists have warned the fiscal deficit may spark a full-on debt crisis if more money doesn’t come in.

Ghana’s ruling party says the solution lies in a 1.75% tax on all electronic payments, locally known as the ‘e-levy’, a proposal so detested by the opposition that it caused a brawl in parliament last year.

DISCLAIMER: The Views, Comments, Opinions, Contributions and Statements made by Readers and Contributors on this platform do not necessarily represent the views or policy of Multimedia Group Limited.
Tags:
Fuel Prices In Ghana
Ghana
Ghana Interest Rate
Inflation