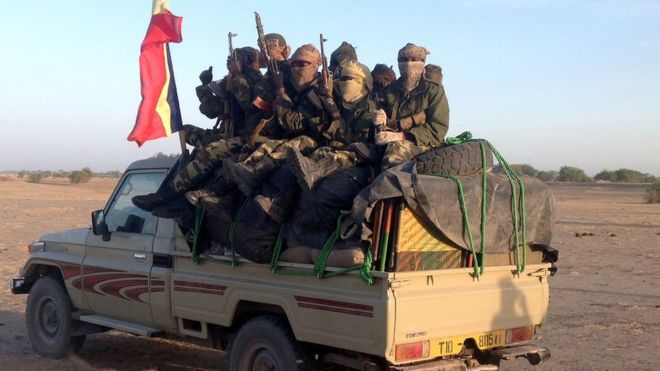 Chad's army has been battling Boko Haram for five years

The men were part of a group of 58 suspects captured during a recent major army operation against the Islamist group around Lake Chad.

An investigation has been launched after four autopsies showed a lethal substance had led to their deaths.

The justice minister told AFP the prisoners had not been ill treated.

Djimet Arabi was responding to allegations that the prisoners were placed in a single cell and given no food or water after their transfer to the capital, N’Djamena, on Tuesday.

The military offensive was launched after jihadists killed nearly 100 Chadian troops on 23 March during a seven-hour attack on an island base in Lake Chad.

It was the deadliest attack on Chad’s army by Boko Haram since their insurgency spread across the border from Nigeria several years ago.

The prisoners, who were being held as part of an anti-terrorism investigation, had been found dead on Thursday morning, public prosecutor Youssouf Tom said.

“Forty of them were buried and the other four were taken to a pathologist, whose report revealed that a lethal substance was consumed, leading to heart problems in some and severe asphyxiation amongst others,” he announced on state television on Saturday.

Mr Arabi confirmed to the AFP news agency that investigations were ongoing: “Was it collective suicide or something else? We’re still looking for answers.”

One detainee, who was taken to hospital on Thursday, had recovered and rejoined the other 13 prisoners who were “still alive and doing very well”, the justice minister added.

The army has said its eight-day operation to flush out militants from hideouts on the islands of Lake Chad was successful.

An army spokesman was quoted as saying that more than 1,000 jihadists were killed in the vast marshy area, which is surrounded by Chad, Nigeria, Niger and Cameroon.

The Boko Haram insurgency began in north-eastern Nigeria more than a decade ago – and the violence has spread to neighbouring countries, killing more than 30,000 people and forcing two million from their homes, according to the UN.

Despite regional efforts to end Boko Haram’s campaign of violence, the group has stepped up its attacks in recent months.