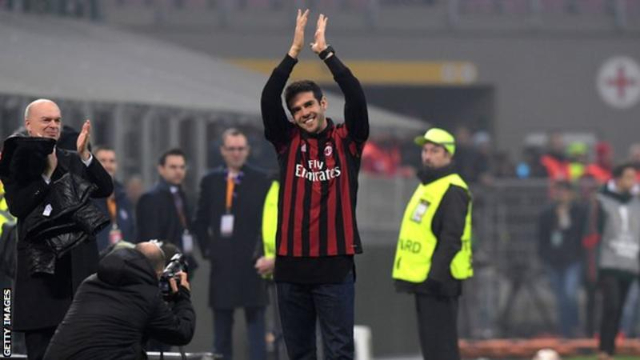 The 35-year-old, who began his career in Brazil with Sao Paulo, was most recently with MLS club Orlando City.

Kaka played his final match as Orlando's season ended in October, and in November was reportedly offered a director role at Serie A club Milan.

He is one of only eight players to win the treble of World Cup, European Cup/Champions League and Ballon d'Or.

A devout Christian, Kaka wrote in a Twitter post on Sunday: "Father, it was much more than I could ever [have] imagined. Thank you! I'm now ready for the next journey. In Jesus' name. Amen."

Renowned for his strong mazy dribbles, his finishing and his creativity in providing goalscoring opportunities for others, Kaka played 92 times for Brazil, scoring 29 times.

Having lifted the World Cup with his country, he won the Champions League with Milan in 2007 and the Ballon d'Or, awarded to the world's best player, in the same year.

He was arguably at his prime during the six years he spent with the Italian giants between 2003 and 2009, during which time he also won the Serie A title in 2004 and the Club World Cup in 2007.

After joining Madrid in a then-world record £56m deal in June 2009, Kaka won the Copa del Rey in 2011, adding the league title a year later.

Having struggled with a series of knee injuries, Kaka returned to Milan for one season in 2013 before leaving for Orlando the following year.