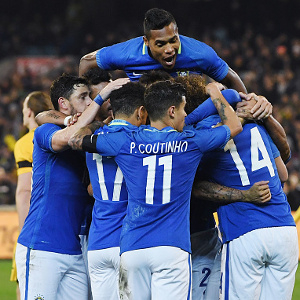 Brazil scored after 12 seconds away to Australia before completing a 4-0 rout in a friendly on Tuesday to hand the hosts a wake-up call before they leave for their opening game against world champions Germany at the Confederations Cup in Russia.

Australia got off to a terrible start when centre-back Bailey Wright gave away possession with the second pass of the game, allowing Diego Souza to hammer home a low shot to groans from most of the 49 000 fans at the Melbourne Cricket Ground.

Souza wrapped up the win for the five-time world champions with a header in added time after Thiago Silva headed the second from a goalmouth scramble in the 62nd minute and substitute Taison finished off a brilliant team goal in the 75th.

Australia, who face Germany in group B of the Confederations Cup on Monday, had entered the stadium with cautious optimism after last week's home win over Saudi Arabia reignited their hopes of a fourth successive World Cup appearance.

But the crushing early blow in Tuesday's game left them rattled and they were only spared further punishment in the first half by Brazil's failure to convert several early chances.

The Brazilians, who lost to arch-rivals Argentina 1-0 in a friendly last week – coach Tite's first defeat after nine wins in charge – were in determined mood against Australia, who must go back to the drawing board before leaving for Russia.

The Australians will also face African champions Cameroon and South American title holders Chile in their section at the Confederations Cup, which is a warm-up event for the World Cup in Russia next year involving the continental champions.