Brazilian presidential candidate among those killed in plane crash - MyJoyOnline.com

Brazilian presidential candidate among those killed in plane crash 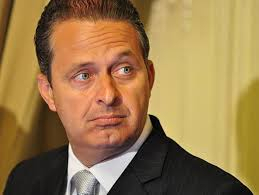 Brazilian presidential candidate Eduardo Campos was among those killed Wednesday morning in the crash of a small plane in Santos, Brazil, the country's state news outlet Agencia Brasil reported.

Campos, 49, was most recently the governor of Pernambuco state, and was a federal lawmaker from 1998 to 2003.

The other victims are an adviser, photographer, two pilots, and two others from Campos' political team.

Eduardo Campos, presidential candidate and former governor of the state of Pernambuco, sits for a photograph after an interview in Sao Paulo, Brazil, on Thursday, April, 17, 2014.

The political figure, who was running in his first presidential election, was among the serious contenders, steady in third place in the polls at about 8%, according to pollster Datafolha. The two leading candidates are incumbent President Dilma Rousseff and center-right candidate Aecio Neves.

Eight other candidates are polling at 3% or lower.

Campos was on his way to a campaign event in Santos.

The plane was a Cessna 560XL that had departed from Santos Dumont airport in Rio de Janeiro en route to Guaraja airport in Sao Paulo state, Agencia Brasil reported.

The plane's maintenance and inspection records were up to date, the state outlet reported.

As the plane prepared to land it swerved because of bad weather, and immediately the air traffic control tower lost contact with the plane, Agencia Brasil reported.

The country's Air Force stated the crash was due to bad weather and is currently investigating the accident.

One witness, a pilot trainee, told CNN he heard a loud noise and saw the plane flying really low.

It was pitched down at 70 degrees, and "hit the ground like a rock," Matheus Giovannini said, adding that it appeared to have hit a house, too.

According to Agencia Brasil, Rousseff will suspend her campaign for three days. Naves stated on his Twitter account that he would also would suspend his campaign activities.

"All of Brazil is in mourning. Today we lost a great Brazilian, Eduardo Campos. We lost a great friend," Rousseff said via Twitter.

Brazil's Superior Electoral Tribunal, which runs the country's elections, announced that Campo's coalition had 10 days to nominate a new candidate. Marina Silva, a former senator who also previously served as the country's environmental minister, is currently the vice presidential candidate.

Campos was married, and had five children.