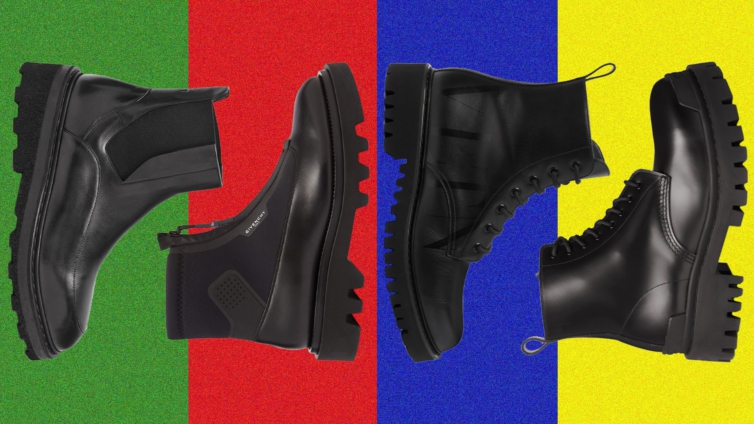 We’re living through a time of unprecedented flux, a moment when preparation is everything and looking fantastic while doing it is key.

Stands to reason, then, that if you’re going to buy any kind of garment right now – be it a coat, a bag or, indeed, a pair of shoes – it should be something that tethers you firmly to the ground, something that makes you feel secure and protected from the elements, something that will in part make up for all those gifts you won’t receive when Christmas gets cancelled come December (joke).

Enter, the biggest, baddest military-inspired bovver boots your feet will ever wear.

Inspired by the combat footwear worn by squaddies on particularly squelchy sorties, this new breed of heavy-duty boot has been doing the round for a few seasons now – most notably with the release of Bottega Veneta’s Lug boots last year, which wouldn’t have looked out of place on the feet of Popeye’s lanky paramour Olive Oyl.

But now, for AW20, they’re back and they’re more massive than ever.

From Prada’s ultra-heavy soled nylon-panelled combat boots, which come complete with a nifty ankle pouch, to Bottega’s latest take on its hardwearing style the Tire (they could have kicked down the Berlin Wall with these bad boys), right now it’s all about a boot with an elongated ankle shaft, a platform sole at least three inches thick – great news for the shorter men among you – and extra-durable black leather upper.

The other good news is that although these boots might look a little imposing on screen, the reality is they’re not that tricky to wear – particularly during the winter months.

As long as you team your new boots with a complementary oversized overcoat and a pair of trousers that are slim but not skinny (black Levi’s 511s will work well here), simply tuck them into your boots – à la Kanye or Shia – and tackle the elements in proper quasi-military style.

2. The best for wearing in the countyside

3. The best to wear on protest marches

4. The best to wear in space

6. Best to wear when its raining

DISCLAIMER: The Views, Comments, Opinions, Contributions and Statements made by Readers and Contributors on this platform do not necessarily represent the views or policy of Multimedia Group Limited.
Tags:
Combat boot season