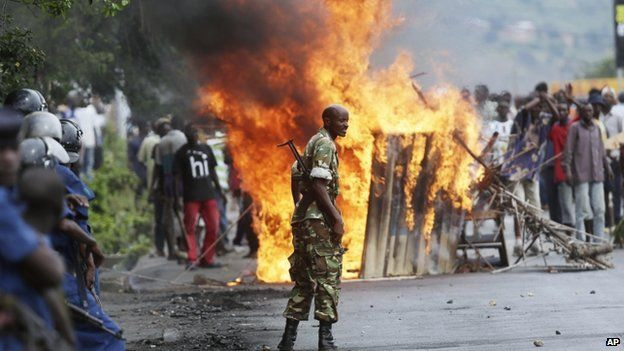 The BBC's Maud Jullien reports from the scene that police fired shots, and she saw two of the bodies being taken away.

Police denied killing the protesters, and said 15 of their officers had been wounded in a grenade attack.

"We are deeply concerned about President Pierre Nkurunziza's decision, which flies directly in the face of the constitution of this country," the US secretary of state told reporters during a visit to Kenya.

The Red Cross says 12 people have been killed since protests broke out on 26 April after Mr Nkurunziza was nominated by the ruling CNDD-FDD party as its candidate for the June election.

Under Burundi's constitution, presidents can only be elected to two terms in office, but Mr Nkurunziza's allies say his first term does not count as he was appointed by parliament.

The government accuses the protesters of being "insurrectional", and says Mr Nkurunziza will press ahead with contesting the election.

The protests are the most serious since Mr Nkurunziza took power at the end of a 12-year civil war in 2005.

Our reporter says more than 1,000 people are on the streets of Bujumbura's Musaga neighbourhood in defiance of a government ban on protests.

The latest clashes started when some demonstrators threw stones and the police responded by firing live rounds, she says.

The army then arrived on the scene, containing the protests, she says.

"I am killed by Nkurunziza," one demonstrator screamed, as he was taken to hospital with a bullet wound in his shoulder, AFP news agency reports.

Many soldiers are thought to be sympathetic towards the protesters, she adds.