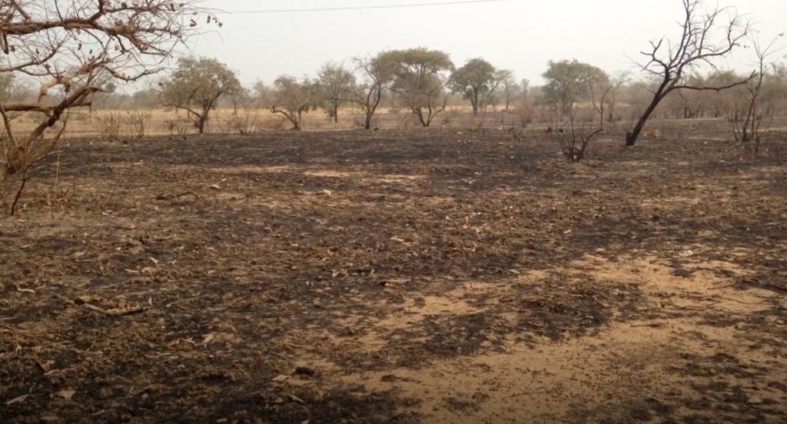 A total of 249,373 hectares of forest reserves and plantations, equivalent to over 600,000 average football pitches, were lost to bush fires between 2011 and 2021, data from the Forestry Commission has indicated.

Scientists said the annual bush fires posed serious threat to the food security of the country if comprehensive steps were not taken to deal with them.

Every year, between November and March, the activities of hunters, farmers, and herdsmen consume large hectares of land through bush burning.

“This increases the potential for accelerated erosion and leaching. It takes away much needed nutrients as well as destroys the physical, chemical, and biological properties of the soil needed for plant growth, ” he said.

“Burning of organic matter from the soil leads to the loss of properties such as water and nutrients. As a result, productive agricultural lands get deteriorated and cannot hold 50 percent of water,” he added.

He said a study conducted by the CSIR revealed that 80 percent of agricultural soils in the country were becoming acidic due to unsustainable practices, especially annual bush fires.

“Soil acidity occurs naturally at a very slow rate as soil is weathered. This process is, however, accelerated mainly by unsustainable productive agriculture like bush fire, improper application of inorganic fertilisers and non-application of liming materials,” Dr Yeboah said.

“Beneficial microorganisms such as bacteria that decompose soil organic matter are hindered in strong acidic soils. This prevents Organic Materials (OM) from breaking down, resulting in the accumulation of OM and the tying up of nutrients, particularly nitrogen, that are held in OM.”

“In strongly acidic soils, the metabolic processes of plant roots are halted, leading to mortality.

“Nutrients are also not readily available in the right form. Phosphorus, for example, is locked up in highly acidic soils. Acidic soils, therefore, cannot sustain crops.”

Dr. Charles Nyaaba, the Head of Programmes and Advocacy at the Peasant Farmers Association of Ghana, described bush fires as an awaiting national food production and supply disaster, saying: “We are sitting on a time bomb waiting to explode very soon.” He told the GNA that many people working in the formal sector had taken up farming as a second job, but bush fire was lowering their interest.

“I am even aware that some investors who are ready to finance the sector and create decent jobs have backtracked. There have been so many agricultural interventions to boost yield, but bush fires continue to erode gains,” he said.

“Thousands of hectares of crops like rice, maize, soybeans and millet are annually consumed and in real time could be equivalent to about five percent of total national food production.”

Dr. Nyaaba said the map of biomass in Ghana showed that lands in the Northern part of the country took up more chemical fertiliser than those in the southern part.

He explained: “This is because the soils are not able to accumulate more biomass to decompose and enrich the soil. That is why farmers resurrect the ‘dead soils’ with chemical fertiliser every season.”

Dr. Nyaaba urged the government to use a portion of the PFJ funds to create a comprehensive nationwide sustained sensitisation programme for locals about the effects of bushfires.

Dr. Nyaaba recommended that the government supplied more compost fertilisers to farmers in the north to rebuild the soils.

“There are some initiatives that have helped halt locals from burning and they are regenerating the soil, so the government should adopt such best practices,” he said.

Mr. Michael Kofi Benni, District Manager at the Forestry Commission’s Yendi Office, proposed that awareness creation on the dangers of bushfires be given national attention and sustained.